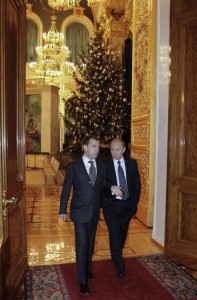 Police estimated crowds of 29,000; security sources estimates were 80,000; protest organisers put the figures at 120,000.  Either way, the protests of December 24, which called for an annulling of the latest election results and for a re-take that would include unregistered opposition parties, was the largest since the fall of the Soviet Union.  Protesters’ chants and slogans called for a Russia without Vladimir Putin.  RFE/RL has compiled a selection of the best placards from the day.  A day after the protests, Left Front leader Sergei Udaltsov was jailed again (having just been due for release) for a further ten days (his 14th detention this year): Garry Kasparov called it a desperate attempt by the authorities to show power; the magistrate in charge of the decision denies succumbing to any pressure from above.  Alexei Navalny spoke to the crowds on the protest day, commenting on the size of the gathering: ‘I see enough people here to take the Kremlin and the government building right now. But we are a peaceful force. We will not do that. Not just yet.’  He also said that he was ready to fight for ‘leadership positions, including the post of president’.

Vladimir Putin’s spokesman, Dmitry Peskov, pointed out that Putin still has the majority, instructing protesters to ‘treat the opinion of a majority with respect’, and dismissed a call by Mikhail Gorbachev for Putin to step down from the presidential elections next year.  Vladislav Surkov, the Kremlin’s chief political strategist, attempted to paint the government as having ‘already changed’ in response to protesters’ demands.  Former finance minister, Alexei Kudrin, who also attended the rally, has offered himself as a mediator between protesters and government officials.  The BBC, Reuters and the Washington Post have all posted protest footage.

Dmitry Rogozin has been appointed Deputy Prime Minister because, according to President Dmitry Medvedev, ‘hands need to be slapped’.  The head of military intelligence has also been replaced: Major General Igor Sergun replaces Aleksandr Shlyakhturov.  The appointment of Rogozin, like that of Sergei Ivanov last week, was designed by Putin to ‘show that his is a harsh, nationalist, authoritarian government. He is doing this because he is scared,’ says Masha Gessen.  Putin has apparently called for heightened television presence for government officials.

Eight one-person rallies were held in Kostroma yesterday to protest against plans to impose fines for ‘promoting homosexuality’.  Former riot police officer Vadim Boyko has been given a three-year suspended sentence for beating a protester at a July protest earlier this year.  The Russian-backed presidential candidate for the elections in Transdniestria has lost to Yevgeny Shevchuk.

PHOTO: Tens of thousands of people took to the streets across Russia on Saturday in the second mass protest in a month, increasing the pressure on Prime Minister Vladimir Putin for reform as he faces the biggest protest wave in the country since the 1990s. (AFP Photo/Mikhail Klimentyev)