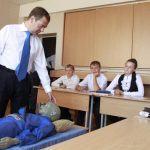 President Dmitry Medvedev is promising more political reforms, hinting that direct elections for the Federation Council could be implemented.  Reforming the upper house of parliament ‘seems to be all the rage’ these days, says Brian Whitmore. Vladimir Putin is implementing an ‘epic’ road check, in a bid to garner support over an issue that concerns the majority of voters.  He has also sought to dispel concerns about a government crackdown by insisting that the state should not restrict internet freedoms.  What could Dmitry Medvedev have in mind for his planned address to the United Russia national congress later this month?  Meanwhile, Medvedev’s strawberry girls have taken part in a schoolgirl-themed event to boost support for their favourite leader.

Residents of Chelyabinsk sought medical help after a toxic spill of bromine that covered the city in fumes.  An investigation has been launched into a breach in safety regulations.