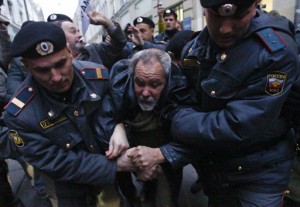 Reports say that at least 12 activists were detained in Moscow yesterday for holding an unauthorised protest against the Kremlin’s control over the upcoming elections.  Gennady Gudkov, a senior deputy in the Duma and member of A Just Russia, has accused Moscow Governor Boris Gromov of ordering local mayors to ensure an unconditional victory for United Russia in December.  ‘In effect, Russians are being presented with a stage-managed campaign between political forces loyal to the Kremlin.’  RFE/RL reports on a weekend action in Irkutsk, directed at development projects that many worry will threaten the local environment, as well as a Khimki protest against deforestation.  Former United Russia member Maksim Dudarev has been placed in solitary confinement (‘for keeping banned items, namely a Samsung mobile phone’) after giving an interview to RFE/RL in which he claimed that authorities orchestrated the fraudulent sale of a Yukos stake in 2004.  The Moscow City Court has denied a plea to close the tax evasion case against Sergei Magnitsky.  Gay rights activist Nikolai Alekseyev has stepped down from his role as head of Moscow Pride, acknowledging that he is ‘fed up’.

Despite currently being in prison for extortion, Alexander Serov, the former Mayor of Bratsk, is attempting to run for a Duma seat.  Vladimir Ryzhkov wonders what happened to ‘Medvedev’s supposed political and economic modernization agenda’.  The President has apparently been mediating talks between the leaders of Turkey and Armenia.  NATO is attempting to warm up its relationship with Russia by sending a delegation to Moscow to discuss plans.  Moscow Mayor Sergei Sobyanin very ostensibly absolves his predecessor from taking any blame for the city’s problems.

Many of Russia’s measures against the spread of HIV have been effective, but the government continues to avoid the issue of transmission between intravenous drug users, says this piece.  Socialite Ksenia Sobchak (rumoured to have close ties to Vladimir Putin) accosted the Kremlin’s youth policy chief Vasily Yakemenko in an upmarket restaurant, demanding to know how he could afford such luxuries.  Pavel Khodorkovsky says that Vladimir Putin has a personal grudge against his father Mikhail.  Defense lawyers for the former Yukos head place their hopes for his release on pressure from the West.  There are links between the two suspect spies arrested in Russia and the ten sleeper agents arrested in the U.S. last year, one of whom, Anna Fermanova, has been sentenced to four months in prison.

PHOTO: An activist is detained by police during a demonstration by the “Left Front” political party to protest the course of forthcoming elections outside the Central Election Committee building in Moscow October 24, 2011. REUTERS/Mikhail Voskresensky