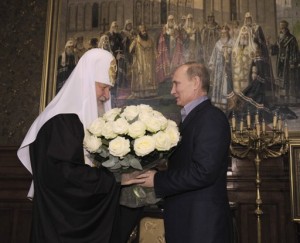 A reported 70 Moscow State University students gathered to protest university involvement in United Russia campaigns and and student union membership of the All-Russia People’s Front yesterday, leading to 15 arrests.  The Moscow Reviews the options for addressing the ‘tricky task’ of expressing discontent at upcoming polls that promise victory for United Russia, who have, according to a former Kremlin adviser, been trying to persuade the clergy to start mentioning the party from the pulpit.  Russians have been lining up around a church on the Moscow River in their ‘tens of thousands’ to kiss a relic brought from Greece and ‘greeted on arrival by Prime Minister Vladimir Putin’.  Putin’s electioneering repertoire include playing ice hockey to mark the news that he has lined up Rosneft to take over the CSKA club.  Early polls in Novgorod indicate that United Russia will not have enough support at the elections for a parliamentary majority: ‘They might not have a magic wand, but they do know the magic words “administrative resources.”’  The PM was booed and catcalled as he took the stage at a martial arts fight in Moscow last night.  His appearance at the fight was widely reported, but not all noted the frosty reception.

‘The smart money says that Prime Minister Vladimir Putin will be president from 2012 to 2024.’  Putin’s Valdai Club debate was ‘particularly offensive’ for being closed off to Russian journalists, says Vladimir Frolov.  Actor and sometime activist Alexei Devotchenko has rejected two state awards, saying that he is ‘sick and tired’ of the government.  Masha Gessen writes on Russia’s political homophobia.  In its latest move in the row with Tajikistan, Russia is threatening to sanction its vegetable imports.  The U.S. says it will provide Russia with the technical details of its missile defence system.

The New York Times reviews Russia’s popular ‘Citizen Poet’ theatre project, devoted to political satire.  King’s College London plans to set up a new institute for the study of contemporary Russia, due to open in 2013.  The long-awaited U.S.-Russia visa facilitation agreement is now subject to further delays.  On why Kaliningrad better deserves the ‘window to Europe’ moniker than St Petersburg.

PHOTO: Russian Prime Minister Vladimir Putin presents flowers to Kiril, Patriarch of Moscow and All Russia, on the occasion of his 65th birthday in Moscow November 20, 2011. REUTERS/Alexsey Druginyn/RIA Novosti/Pool