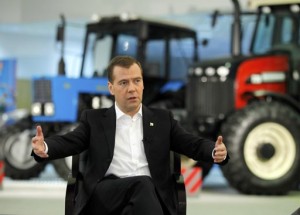 The Moscow Times has a rundown of all of the parties on the ballot for the December 4 Duma elections.  The Communist Party is defending the use of Stalin’s image on its election posters.  Prime Minister Vladimir Putin will hold off on staging his annual live call-in show until after the elections, as his spokesperson promised that the session would not amount to pre-election campaigning.  ‘United Russia leaders have issued instructions to regional offices to obtain election results ranging from 60 percent to 65 percent of the vote […] how will the West react to this pathetic charade?’  President Dmitry Medvedev says that the Georgian war halted NATO’s eastwards expansion, and reiterated his claim that the war was ‘indispensable for the salvation of human lives’.  Russia has branded new U.S. sanctions aimed at Iran as ‘unacceptable and contradictory to international law’.

Senior Lieutenant Aleksei Kozlov discusses the difficulties of attempting to reform the prison system from the inside, saying that he ‘hasn’t met with any understanding’ from administrators at the Butyrka prison where Sergei Magnitsky died.  Putin wasn’t booed at a recent martial arts fight, say the organisers – the audience were heckling the defeated fighter: RFE/RL has the video.  Moscow may deploy tactical missiles in Belarus to ‘counter threats to Russia’s strategic forces in case U.S. missile defense components are deployed close to our borders’.  There is an ever-decreasing likelihood that engineers will be able to save the $170 million Phobos-Grunt space probe, with efforts to cease at the end of the month.  The Soyuz space capsule’s trio of astronauts has landed safely back on Earth.

The Head of the Bulgarian Orthodox Church acknowledges the substantial power of Russia’s Patriarch Kirill.