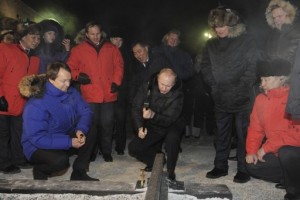 The blog of opposition figure and author Boris Akunin has been hacked, with all of the entries erased.  And a further opposition figure, Boris Nemtsov, alleges that the Kremlin is responsible for the publication of his private phone calls in which he referred to other opposition activists as ‘hamsters’ and ‘scared penguins’, and has apologised for any offence caused.  A court in Voronezh has ordered that the regional office of Nashi be shut down.  Foreign Minister Sergei Lavrov is confident that the death of Kim Jong-Il will not affect relations between Russia and North Korea.  Why has Russia not acknowledged the death of Czech President Vaclav Havel, wonders The Other Russia.  Russia wants NATO to account for civilian deaths in Libya following its air strike campaign.

Yabloko founder Grigory Yavlinsky has submitted his presidential candidate registration documents (running in the place of Alexei Navalny, who many had hoped would be the party candidate despite leave Yabloko in 2007).  Vladimir Putin has also registered.  Following Putin’s suggestion during his Q&A last week, the government will spend $470 million on election station webcams.  Presidential candidate Mikhail Prokhorov has warned that Vladimir Putin’s economic policies will lead to ‘catastrophe’.  Vladimir Ryzhkov, meanwhile, anticipates that ‘The country’s leaders and institutions will completely lose the people’s trust by next summer.’  The U.S. Senate has approved the appointment of Michael McFaul as Ambassador to Russia.

Ivan Tsetsersky, the Mayor of Pskov, will resign following local results of just 28% for United Russia in the elections.  ‘Society’s rejection of the current authorities, which was made clear by the protests this month, does not necessarily indicate support for the opposition.’  Indian lawmakers are in an uproar over the news that a court in Tomsk wants to add the Bhagavad Gita to a list of banned, extremist literature.

PHOTO: Russia’s Prime Minister Vladimir Putin (C) takes part in a foundation laying ceremony of the Kyzyl-Kuragino railway during his visit to the Republic of Tyva December 19, 2011. REUTERS/Alexsey Druginyn/RIA Novosti/Pool