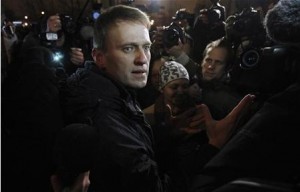 Alexei Navalny has been released after spending two weeks in prison for taking part in a post-election anti-government protest, and announced to the crowd gathered to greet him, ‘These 15 days taught me not to be scared. I am not alone. We are the majority.’  Navalny is calling on his supporters to unite against ‘chief swindler’ Vladimir Putin’s presidential bid, and rumours currently abound that he may launch his own.  Ilya Yashin was also freed.  The next opposition protest is planned for December 24, with over 30,000 people pledging on Facebook that they will attend (adding to the case that ‘Putin and his circle are afraid of the Internet’).  20 protesters were arrested in Moscow today for gathering to mark the first session of the new parliament ‘chosen in a fraud-tainted election’, which opened ‘in defiance of mass protests’.  53 criminal cases have been opened into election irregularities in 27 regions.  The new website behind Vladimir Putin’s project to install web cameras at polling stations has already been hacked, and in any case, notes this piece, such election monitoring on a Russia-wide scale would crash internet providers.

Opposition leader Boris Nemtsov has publicly apologised to all those that may have been offended by remarks made in private telephone calls leaked by Lifenews.ru, as his supporters defend Nemtsov by saying that no double dealings have been uncovered.  The European Court of Human Rights has fined the Kremlin $1.6 million for violating the rights of the Dubrovka theatre siege hostages.  Pro-Kremlin youth group Nashi has been accused of hiding funding from foreign organizations and individuals, and its Voronezh office will be closed for repeat violations of the law on public associations.  ‘[T]he aim of Vladimir Putin’s regime and most other authoritarian regimes in the former Soviet Union is to maximize corruption for the enrichment of themselves and a broader elite.‘

Dmitry Medvedev will make his last presidential state-of-the-nation address tomorrow, during which he ‘will likely say the same things’ about election reform as Vladimir Putin has been saying over the past week, ‘never running ahead of his boss’.  Lifeboats near the site of the sunken Kolskaya oil rig have been found empty.

PHOTO: Anti-corruption blogger Alexei Navalny speaks with journalists as he leaves a police station on the day of his discharge in Moscow, December 21, 2011. (Reuters/Denis Sinyakov)