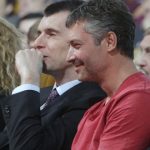 RFE/RL reports on how human-rights activists and opposition politicians have called on the US Senate to blacklist 305 officials involved in the prosecution of the Yukos oil firm and its founder, Mikhail Khodorkovsky.  Today the European Court of Human Rights deals with the costliest demand in its history as it rules on a claim by Yukos for $98 billion in damages from the Russian government, after it was dismantled and absorbed by the state.  The navigator on the TU 134 passenger airliner which crashed in northern Russia in June, killing 47 people, was found to be in a state of ‘light alcoholic intoxication’, the New York Times reports.  Despite the findings, and the series of disasters which have befallen Russian airspace in recent months, Ria-Novosti reports that United Russia will not raise the issue of Transport Minister Igor Levitin’s resignation in parliament.

In an unexpected twist, Russia’s Right Cause party is apparently negotiating with its former leader Mikhail Prokhorov on his possible reinstatement as a party leader, just days after he left the post.  The Yabloko Party has expressed hopes that it can create a faction at the 6th State Duma lower house of the Russian parliament, to which end they need 7% of the vote.   A member of United Russia’s advisory board has suggested that Vladimir Putin is unlikely to run for President next year instead focusing upon his role as ‘national leader’.  The Prime Minister’s All-Russia People’s Front is reportedly hoping to raise support for the ruling party in the December parliamentary elections by as much as 15 percentage points.

Disagreement still looms over the US and Russia’s stances on Syria: in a meeting with Sergei Lavrov on Monday, Secretary of State Hillary Rodham Clinton reportedly insisted that the UN Security Council must condemn strongly the Assad regime’s‘inexcusable violence’.  Russia apparently still favors dialogue.  ‘Russia’s support for the Assad regime is rooted in self-interest, and calculates that Assad could yet prevail against the Syrian opposition movement’ says an analysis by Christian Science Monitor.

ITAR-TASS reports on how the Prosecutor General’s office has found that more than 30 people were illegally enrolled for six specialties, including ‘law’ at the Institute of Economy and Culture in Moscow.  Moscow authorities continue their onslaught on religious edifices; this time razing a shelter owned by the Missionaries of Charity, a Catholic religious organization founded by Mother Teresa.  The region’s forests are facing another round of auctions, much to environmentalists’ dismay.