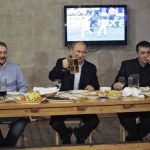 Hundreds of Muscovites marched last night to mark the third anniversary of the double murder of lawyer Stanislav Markelov and journalist Anastasia Baburova; there were no arrests at this gathering.  Three people were detained for taking part in a gay rights rally also held in Moscow last night.  The Central Election Commission has rejected Vladimir Churov’s offer of resignation.  The FSB Chief in the Komi region says that human rights groups Memorial and Golos are ‘extremist organisations’.  Vladimir Putin has accused opposition leader Boris Akunin of being politically motivated by his Georgian heritage.  Sberbank head German Gref says that Russia’s current wave of dissent is not comparable to the Arab Spring. ‘We can’t even think about it.’  Chrystia Freeland discusses her recent interview with Mikahil Prokhorov and the ‘wishful thinking […] of a cozy elite-driven evolution’.  Vladimir Putin’s approval rating has crept back up over 50%.

BBC2’s ‘Putin, Russia and the West’ programme, in which Jonathan Powell discusses the ‘embarrassing’ plastic rock used by Britain to spy on Russia in 2006, is reviewed in a number of publications today. ‘Trying to tell Russia’s history as it happens is a mug’s game.’  The former U.K. Ambassador to Russia insists that his government’s activities with Russian NGOs during that time were ‘completely above board’.  The Guardian has video of the device, which FSB official Sergei Ignatchanko calls ‘a miracle of technology’ estimated to cost ‘several million pounds’.  The first of the four-part documentary, which will be broadcast tonight, also includes allegations that the Taliban contacted Russia in 2001, asking them to join an anti-U.S. alliance.  The Washington Post looks at Sergei Lavrov’s various attacks on U.S. policy this week.  Dmitry Rogozin estimates that the U.S. and its NATO allies have roughly one thousand missiles capable of intercepting Russia’s own; NATO chief, Anders Fogh Rasmussen, says that Russia’s plans to boost its military forces in Kaliningrad would be ‘a waste of money’.  A German envoy has slammed Russia for preventing the U.N. from taking decisive action in Syria.

Pictures of Epiphany celebrations all over Russia, in which participants bathe in icy lakes, have been compiled here and here.  Is there a stereotyping of Russian women in India?  The head of Buryatia has called for a renewed effort to wipe out the region’s cannabis plantations.