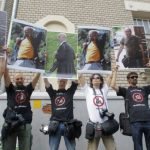 At his meeting with Chancellor Angela Merkel in Germany, President Dmitry Medvedev described the withdrawal of the human-rights oriented Quadriga Prize from nominee Vladimir Putin as a manifestation of ‘cowardice and repugnance’. The Petersburg Dialogue is not normally chaired by heads of state, so when the President said neither himself nor Ms Merkel would chair it in the near future, certain commentators were quick to suggest therein lay a hint that he plans to retain the presidency.  Brian Whitmore describes the many rounds of pre-election crypticism as evidence of ‘managed pluralism‘.  Former Soviet President Mikhail Gorbachev has voiced his opposition to the possible return of Vladimir Putin.

Russian journalists have rallied in central Moscow against Georgia’s arrest of three photojournalists who face up to twelve years in prison over accusations of spying for Russia. The Guardian reports on a play at London’s Arcola theater which showcases the struggles of six journalists, among them a Russian, working in repressive regimes.  ‘Society should not be restricted to discussing subjects imposed by state-controlled television’, says an adamant Yulia Latynina.  President Medvedev has reportedly added an incentive to largely punitive measures to reduce graft in law enforcement, by signing a law that will triple police officers’ pay.  As scrutiny over the Sergei Magnitsky case intensifies, it has been revealed that investigators refused to give the deceased’s mother DNA samples for an independent investigation.

Echoing previous comments made by Foreign Minister Sergei Lavrov, President Medvedev has told reporters that siding with any one camp in the Libyan conflict is ‘extremely bad’ for the war-torn county and described the possibility of a compromise between rebel factions and the government as ‘achievable’. The President also expressed his opposition to Libya-type resolution on Syria. The continued presence of a Russian air base in Tajikistan is, it would appear, an ongoing sticking point source between the two countries, as talks on its future failed to yield an agreement.  After a long bout of cold diplomatic relations, Russia and Britain apparently plan to extend bilateral military cooperation.