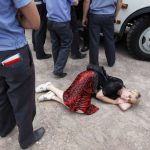 More news from the Lubyanskaya Ploshchad sit-in in support of detained Other Russia activist Taisia Osipova, who colleagues claim has been framed on drug charges.  Yesterday 19 protestors were detained, some of whom claim to have been beaten in police custody, leading one of them to be hospitalized.  Somewhat ironic then may seem statements made by the Russian Ambassador to Belarus, Aleksandr Surikovl who has criticized Minks’ intolerance of unsanctioned rallies.   An intolerance which manifested itself yesterday when forty people were arrested in a clapping protest against President Lukaschenko on the 17th anniversary of his rule.   An article in the Moscow Times reports that the level of police attention targeted towards protests and extremism means that other dangerous crimes such as child abuse are being ignored.  In another blow to the reputation of Russia’s prison system, photos of a toga party held by tequila-swilling crime boss Anton Kuznetsov has caused uproar.  According to a new survey, United Russia and a Just Russia are losing ground to the Communists and the Liberal Democratic Party, although it is unlikely this will break the hegemony of United Russia.  First Deputy Prime Minister Igor Shuvalov is the latest to join Prime Minister  Putin’s All Russian People’s Front.  In an attempt to bolster his Right Cause party, which he hopes will become the second-biggest Duma faction, Mikhail Prokhorov has hired experienced spin doctor Rifat Shaikhutdinov to orchestrate part of his campaign.  RFE/RL reports from the Siberian labor camp where Mikhail Khodorkovsky has, for the first time since December, been granted a visit by his mother.

Russian Foreign Minister Sergei Lavrov has begun talks with his Libyan counterpart Abdul Ati al-Obeidi in Moscow; the latter has apparently welcomed Russian assistance in ‘peaceful mediation’. Libya’s foreign minister denied that the talks included plans to remove Moammar Gadhafi from power, but that putting an end to the conflict was the centerpiece of discussions.  Russia’s envoy to NATO has excoriated France for its decision to arm Libyan rebels but maintains that Russia will not supply weapons to Moammar Gadhafi.

Succession questions are looming after Kazakh President Nursultan Nazarbayev was reportedly hospitalized in Germany for a prostate operation.  The possible departure of the 71 year-old from central Asia’s biggest energy producer has stoked fears of political instability. Moscow has rebuffed claims that alleged Serbian war criminal Goran Hadzic, who was arrested yesterday, found shelter in Russia during his fugitive years.  Lithuania has voiced dismay at Austria’s freeing of former KGB-man Mikhail Golovatov, wanted for ordering mass killings in Lithuania.

It has been reported by Russia’s consumer rights watchdog that the number of HIV cases in the first six months of 2011 rose 20% year on year.  According to WHO figures, Russia annually suffers almost twice as many road deaths per capita as the United States.  The Moscow Times looks at one man’s crusade to improve driving conditions in a city where, as this op-ed points out, car is king.

PHOTO: An Other Russia activist being detained on Lubyanskaya on Wednesday, July 20, 2011.  (Denis Sinyakov / Reuters)