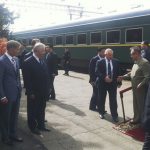 North Korean leader Kim Jong-Il has arrived in Russia, on his personal armoured train, for a gas pipeline and nuclear energy-focused tour that will include a meeting with President Dmitry Medvedev.  Bloomberg forecasts ‘massive economic cooperation with North and South Korea’.  Yevgeny Dushko, the Mayor of Sergiev Posad, a town near Moscow, has been shot dead in what looks like a contract killing.  Conflicting reports have been released about the turnout of the Petrovsky and Krasnenkaya Rechka municipal elections in which Valentina Matviyenko ran for deputy; the Petrovsky turnout is being reported at 18.8 – 36.5%, and Krasnenkaya Rechka as 10.6 – 30%.  The election commission said that the figures show ‘a regular turnout’; the Moscow Times calls the figures ‘astonishingly high for a by-election’, noting the authorities’ use of free ice-cream, medicals, and acrobatic demonstrations to draw voters.  Matviyenko won both of these, in preparation for her delegation to the Federation Council, where she is already expected to receive the role of Speaker.  Dmitry Rogozin has registered a new nationalist group called Rodina, which is expected to join Vladimir Putin’s All-Russia People’s Front.  As organizations for the disabled joined his Front on Friday, the Prime Minister made a public show of support, signing a U.N. Convention on disability rights.

President Dmitry Medvedev is still talking as though he expects to continue as President next year, says this Kommersant piece, translated by Time.  According to the Interior Ministry, police officers most exposed to situations where bribes are common will have to take lie-detector tests.  The Independent looks at the problem of Russia’s medical opiate addicts through the case study of Ivan Kanev, the son of Novaya Gazeta crime correspondent, Sergei.  A poll by an independent Russian think-tank suggests that over half of Russians consider personal wealth to be a main priority for civil servants.

The lost Express-AM4 satellite has been found off of its orbit.  Firefighters have reportedly succeeded in putting out all fires in the Far East.  Political reasons (Russian support of Palestine) are preventing an Israeli gallery from participating in contemporary art fair Art Moscow.  The Moscow Times profiles the city of Cheboksary (and in particular, its high suicide rate).