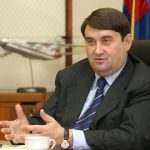 ‘They do not have a front … So they hit each other in the ear. That is hooliganism … Imagine how they would fight for money!‘: Vladimir Putin’s verdict on the Alexander Lebedev vs Sergei Polonsky television brawl delivered at a meeting with the All Russian People’s Front.  Russia’s NATO envoy, perennial provocateur Dmitry Rogozin, who also leads a Russian nationalist campaign group, has thrown his support firmly behind the Prime Minister and urged colleagues to join the People’s Front.  Since becoming the speaker of the upper house of parliament, Valentina Matviyenko has become ‘the most powerful Russian woman since Catherine the Great’ says the Telegraph.  ‘In practice, her ranking behind President Medvedev and Mr Putin, the Prime Minister, is little more than a paper position as head of a rubber-stamp institution‘ says Tony Halpin.  Matviyenko, who was previously the governor of St Petersburg, apparently supports, in principle, the idea of electing senators to the Upper House.  ‘For Russia, honest and free elections, as well as political competition, are as necessary as fresh air‘ says perestroika architect and Putin-critic Mikhail Gorbachev.  RFE/RL examines how the Russian media turned upon Mikhail Prokhorov and his allies, among them pop star Alla Pugacheva and antidrug crusader Yevgeny Roizman, as the billionaire locked horns with the Kremlin.  ‘Indisputably there is one beneficiary that will gain from the [Right Cause] scandal. It is the Yabloko party, the constituency of which may be joined by part of the Right Cause consistency.’

The fact that Russia ‘keeps backing losers in the Arab spring’ means that the Kremlin ‘will emerge as a much reduced player in the Arab world’ says an article from Russia Watch.  The Telegraph reports on how a Russian family believes their 20-year-old nephew was tortured to death as a conscript in the army, whilst the official report ruled suicide.  A new book about the FSB has the prompted the security services to seek information on its publishers, a move which the book author’s believes to be an assault on the freedom of independent publishing.  State-owned radio station Vesti FM has been accused of inciting racial hatred after airing a report that a neighborhood in the town of Lyubertsy had turned into a crime-riddled African ‘ghetto’.

In a move likely to problematize World War Two commemoration services, a top European court has banned the Soviet Union’s hammer and sickle from being used as a commercial trademark as it is considered a ‘symbol of despotism’in some EU countries. The Burnt By the Sun Oscar debacle continues.

PHOTO: Transportation Minister Igor Levitin reiterated on Wednesday, September 21, that no “external factor” contributed to the crash which killed the Lokomotiv Yaroslavl hockey team. The minister, who has held the job since 2004, is regularly criticized for deadly incidents that plague the country’s decrepit transportation infrastructure.  (Sergei Nikolayev/Vedomosti)