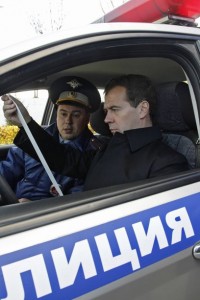 The Other Russia estimates that 1,500 people gathered in Moscow on Saturday at a Parnas-organised rally against the unfairness of the upcoming elections.  Students at Moscow State University were detained last week for attempting to protest during a surprise, heavily stage-managed visit by President Dmitry Medvedev, who seemed not to notice.  Medvedev is becoming ‘increasingly candid’ about his relationship with Vladimir Putin, notes Bloomberg, and believes in the power of badminton. ‘Those who play badminton well, take decisions quickly.’  RFE/RL interviews former Moscow Mayor Yury Luzhkov, who refutes blame for last year’s smog and forest fires, and calls United Russia ‘shameful’.  In retaliation for the U.S. ban on officials connected with the death of Sergei Magnitsky, Russia, in turn, has blacklisted ‘dozens’ of U.S. officials thought to be linked to human rights violations.

The European Union and Moscow have resolved all remaining differences over Russia’s World Trade Organization membership; the hurdle of Georgia still remains to be overcome, but Foreign Minister Sergei Lavrov believes that this ‘is not an obstacle’.  Russia wants the U.N. to end the no-fly zone over Libya, and is calling for an investigation into the death of the country’s former leader, Moammar Gadhafi.  New curbs on abortions will limit the procedure to 12 weeks of pregnancy, but still fall short of the measures initially called for by the Orthodox Church.  Two Russians have been arrested in Germany on suspicion of spying.