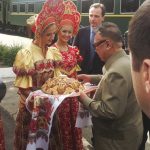 It has been reported that Yevgeny Dushko, the mayor of Sergiyev Posad who was shot dead yesterday morning, had recently aired corruption allegations against local officials.  A close ally of Vladimir Putin has been picked to replace Valentina Matviyenko as the Governor of St Petersburg: Georgy Poltavchenko was appointed in the acting role yesterday.  As the Washington Post recalls the suspicious nature of her registration, Boris Nemtsov denounces Matviyenko’s municipal elections wins as ‘100% fraud’.  Nemtsov attended a PARNAS gathering held in Moscow yesterday to mark the 20th anniversary of the reinstated Russian flag.  A court, meanwhile, has upheld the decision to deny registration to the party.  As Libya’s rebels seize power, Russia expresses hopes for an end to ‘misfortune and suffering’ in the country.  Sergei Lavrov commented that the conflict in Libya could have been solved much earlier by diplomatic means, and blamed NATO for interfering; he also said that military intervention in Syria is out of the question.

The Vote Against Them All movement, led by Boris Nemtsov, is calling for Russians to boycott the October Duma elections by crossing out their entire ballots.  Reuters reports on Moscow’s support for displaced Afghans: ‘Russia wants to reassert its role that it is a friend of the Afghan people and can be trusted.’  Will we have to wait until December to find out who’s running for president next year?  Reuters is running a Q&A on North Korean leader Kim Jong-Il’s visit to Russia.  The suspected involvement of an Abkhazian presidential candidate with Georgian leadership 20 years ago is causing havoc with the campaign.  Alexei Pankin says that, despite what politics would have you think, Georgians feel great friendship with Russia.