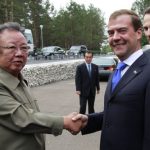 Retired police lieutenant colonel Dmitry Pavlyuchenkov has been arrested on suspicion of organising the criminal group that carried out the murder of Anna Politkovskaya.  Further reports suggest that investigators know who ordered her killing, but officials say ‘it is too early to make this information public’, and the lawyer for Politkovskaya’s family has spoken of ‘a turning point’ in the investigation.  Talks between President Dmitry Medvedev and North Korean leader Kim Jong-Il have begun in Siberia.  Russia continues to oppose a freeze on the assets of Syrian President Bashar al-Assad and an arms embargo: ‘We hope to see progress [and] we think we should continue to work within the scope of that position.’  A parliamentary foreign affairs committee head warned, ‘I would advise all countries thinking about Syria to keep in mind the negative example of Libya.’

A Just Russia is proposing an alliance with the Communist Party, hoping that such a move would break United Russia’s hold over the electorate in this December’s elections; the Communists say that they will consider the move, only if the former breaks its existing ties with United Russia.  Prime Minister Vladimir Putin would like political primaries to be introduced for all parties.  Former St. Petersburg Governor, Valentina Matviyenko, looks back on her efforts to introduce new technologies for managing the city’s economy during her tenure,  as her replacement, Georgy Poltavchenko, makes his first promises to prepare residents for the winter, in a bid to ensure that last year’s snow-related disasters will not be repeated.

Six soldiers have been killed in a blast at an anti-aircraft missile facility in Astrakhan – the fourth incident of this kind this year.  Airplane accidents have doubled in 2011, year-on-year, and the number of plane-related deaths has quadrupled.  Proton-M rocket launches have been suspended after the loss of the $265 million Express AM4 satellite last week, which is being blamed on the failure of its upper stage.

On the power of poetry in Communist Russia.