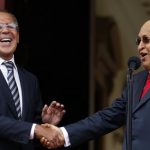 According to the Kremlin, North Korean leader Kim Jong-Il says he is ready to discuss suspension of his country’s nuclear weapons programme if international six-party talks can be resumed.  North Korea owes Russia $11 billion in debt, dating from before the collapse of the Soviet Union; new attempts by the two leaders to agree on debt restructuring constitute ‘a breakthrough’.  President Dmitry Medvedev has ruled out a compromise deal with Ukraine that would allow it to pursue free trade pacts with the E.U. as well as with the Russia-led Customs Union, effectively forcing Ukraine to choose either itself or Europe.  Medvedev calls on Libyan rebels to sit down for talks with Muammar Gaddafi, as U.S. Senator John McCain and Nina Khrushcheva (separately) insist that Russia, too, needs democracy.  Russia continues to oppose sanctions against the Syrian President.

It has been revealed that retired senior Moscow police investigator Dmitry Pavlyuchenkov (or Pavliochenkov), who has been detained on suspicion of organising the killing of Anna Politkovskaya, was a ‘mumbling secret witness’ for prosecutors at the trial.  Novaya Gazeta says that investigators’ information regarding the identity of Pavlyuchenkov’s client ‘partially overlap with our own’.  An unmanned supply spaceship crashed in Siberia just minutes after its launch yesterday, spurring Roscosmos to discuss proposals on how to fulfil Russia’s obligations to the International Space Station.  Vladimir Putin turns his attention to higher education.

Nationalist football fans planning to rally on Sunday have made authorities wary.  Three men have been charged in connection with a series of sexual health billboards depicting the President and Prime Minister.  A South Ossetian minister praises Russia’s deliveries of aid.