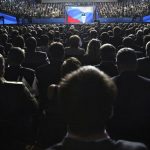 It’s official: Vladimir Putin will run for President next March.  The decision was announced at the United Russia party congress in a speech met by ‘rapturous applause’.  While intense consideration may have been given to the run up to this announcement: ‘The question, as The Economist has regularly written, was not whether he would stay in power, but how he would do it’.  First Deputy Prime Minister Igor Shuvalov has said United Russia faces a ‘serious’ fight with the leftist parties in the run-up to elections.   Get real, says RFE/RL: ‘Putin’s victory in March is a virtual certainty, given both his popularity and Russia’s tightly controlled political system.’   Having extended the presidential term, a victory would mean Putin could remain power until he is 72, in 2024, which would make his reign as ‘national leader’ almost as long as Josef Stalin’s.  The Washington Post makes excellent use of sarcasm in this editorial:  ‘Mr. Putin has not sent millions to their deaths or to the gulag. He showed that the imprisonment or exile of a few key businessmen and the unpunished murders of a couple of dozen crusading journalists could silence their compatriots almost as effectively’ .  ‘I think the Brezhnev analogy is quite a serious one’, adds the editor of the Economist.  It was also inferred that President Medvedev will swap positions with his tandem partner and become Prime Minister; it also possible he may head the United Russia Party if it retains majority in the State Duma while Putin returns to the Kremlin after the 2012 election.  Which may lead to an electoral and legal quandary, says Victor Davidoff, for ‘how can the president run for a seat in parliament before his term is up?’The surprise news is that Finance Minister Alexei Kudrin has vowed that he will not stay in a new government led by Medvedev over the disagreements they have had, principally over military spending.  This is ‘an outcome that has left some wondering whether Kudrin will somehow try to edge Medvedev out of his promised prime minister spot’, the FT states.  A hypothesis also presented by former Deputy Economic Minister Ivan Starikov, who told the Moscow Times, ‘Kudrin, not Medvedev, is the No. 1 candidate for the prime minister’s post’.

The Independent attempts to gauge the public reaction: resignation seems to be the key term.  The New York Times also senses some relief: ‘[S]stability, is perhaps his greatest asset’.  Opposition politicians meanwhile have voiced their despair; the Other Russia has a good round up of reactions. ‘Putin as president […] that is total stagnation. It is the victory of a corrupt oligarchy. It is the failure of modernization,’ says horrified analyst Sergei Markedonov, quoted by the New York Times.  Boris Nemtsov, leader of the opposition party Parnas, redoubled the criticism: ‘Putin is a provocateur of the highest order. He is provoking the Russian nation to rebellion’.   Some have warned that that the system will face a ‘crisis of legitimacy’ which could soon engender a growing protest movement.  Anti-corruption blogger Alexei Navalny has told Luke Harding that this could even spell revolution, with the Caucasus as a catalyst.

In other news, the Moscow Times reports on a speech given by Navalny at the London School of Economics on the weekend, in which he expounds his methods of tackling corruption.  Prompted by the discovery of a report issued three days after Sergei Magnitksy died which said that the evidence warranted opening a murder case, his mother has asked for a murder investigation of Russia’s chief prosecutor and deputy interior minister amongst others.  Two activists from the Bloggers Association in Saratov Oblast have been detained by police while protesting government control over the Internet.  How Guardian journalist Luke Harding fell foul of the Kremlin.  ‘Economic and political progress has been bought at the expense of America’s quietly forgetting its democratic values and human rights’: Mikhail Khodorkovsky takes the US to task on the reset.

Moscow has established diplomatic ties with the Pacific island nation of Tuvalu, which recently became the fifth country to recognize Georgia’s two breakaway regions of Abkhazia and South Ossetia.  Russia’s ambassador to the U.K has urged Britain to extradite 43 of its citizens who are wanted by judicial authorities back in Moscow.

PHOTO: Some of the more than 11,000 people at the United Russia convention listening to Medvedev speak Saturday, September 24, 2011.  (Igor Tabakov / MT)