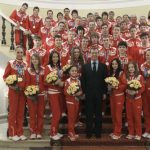 Moscow’s City Hall agreed to sanction an opposition protest of 50,000 people on February 4, but Sergei Udaltsov, who is co-organising the next opposition protest march, says that protesters will not accept the alternative routes that authorities have proposed.  At a campaign meeting in Tomsk yesterday, Prime Minister Vladimir Putin engaged in some ‘pre-election saber-rattling’ by accusing the U.S. of ‘want[ing] to control everything’.  Golos has promised to deploy 2,000 election observers in March, despite facing ‘intensifying harassment’ from the authorities.  United Russia says that it is ready to work with Yabloko’s election observers.  The President’s Human Rights Council has launched a campaign for fair elections.  Blogger Ilya Varlamov has been questioned by police for posting photographs of ‘strategic buildings’ online.  A new draft law has been approved in the State Duma to ban citizens convicted of extremism from teaching in educational institutions at all levels.  Mikhail Prokhorov’s presidential candidacy has been approved, finalising the ballot which comprises five candidates: Prokhorov, Vladimir Putin, Gennady Zyuganov, Sergei Mironov, and Vladimir Zhirinovsky.

President Dmitry Medvedev has composed a bill to increase the power of the Prosecutor General’s Office, which would return power lost by Prosecutor General Yury Chaika when the Investigative Committee was formed last year.  Medvedev appeared at Moscow State University for a question and answer session yesterday, smoothing over feathers ruffled during his ‘carefully staged visit’ last year, and saying that he would not rule out running for president again in the future.  ‘I am only 46 years old. That’s not too old to give up any future political battles.’  Medvedev says that he has been given a list of people suspected to have been involved in the beating of journalist Oleg Kashin in 2010; he also promised personally to look into the case of Taisia Osipova, the wife of an Other Russia activist jailed on drug charges; and said that he ‘feel[s] sorry’ for Mikhail Khodorkovsky.

Nikolai Kartozia, a senior producer at state-owned NTV has left under a ‘mutual agreement’, prompting speculation that propaganda at the channel would increase without him.  State-run Russia Today has won exclusive first broadcast rights to Julian Assange’s 10-part series of interviews with key political figures.  The Council of Europe’s outgoing human rights commissioner has complained that Russia’s human rights situation has not improved since he entered office six years ago.  Russia will continue to block any U.N. sanctions against Syria.

The books that Vladimir Putin should add to his reading list – suggestions including emigre scholars.

PHOTO: Russia’s President Dmitry Medvedev poses for photographers with Russian medal winners of the 2012 Winter Youth Olympic Games during their meeting at the Kremlin in Moscow January 25, 2012. REUTERS/Yekaterina Shtukina/RIA Novosti/Kremlin