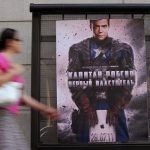 Four members of the Other Russia group have been detained in Nizhny Novgorod for protesting what they call the political arrest of Taisia Osipova.  The Popular Front’s electoral program is ‘surprisingly liberal’, says Brian Whitmore, reporting that the program argues for increased political competition and higher authoritative accountability.  Fears are growing that mayoral elections could be done away with completely.  NATO envoy Dmitry Rogozin is not excited about the prospects of a Republican U.S. government: ‘the alternative to Barack Obama is folding of all cooperation programs between Russia and the United States’.  Moscow posters of Dmitry Medvedev dressed as Captain America, put up in ‘an act of hooliganism’, have been taken down.  Muscovites are protesting Mayor Sergei Sobyanin’s plan to repave the streets with stone tiles, as Sobyanin’s wife apparently owns a stone tile business. ‘There are serious grounds to suspect an element of corruption.’

Platon Lebedev’s wife read an emotional letter from his daughter in court yesterday as part of the ongoing hearing for his parole request.  The editor of Novaya Gazeta offered Lebedev a job as economic observer at the paper should he be released.  Lebedev has been reprimanded for his prison conduct in relation to a pair of lost pants.  The Russian blogosphere continues to hum with the news that Norway’s bomber, Anders Breivik, admires Vladimir Putin. ‘How the Kremlin will ever wash its hands of this, I don’t know,’ wrote one.

Yulia Latynina has compiled a long list of recent man-made Russian disasters: ‘The more bureaucrats and inspectors Russia adds to its ranks of government employees, the higher the number of fatalities from man-made disasters.’  The Federal Forestry Agency promises that last year’s peat bog smog will not be repeated, thanks to improved measures for preventing peat bog fires.  Greenpeace has apparently suggested that the authorities are covering up news of fires currently blazing.  60 people have been evacuated from a village in Volgograd over forest fire concerns.

The Orthodox Church has agreed with Georgian church leaders that it will not claim authority over the breakaway regions of Abkhazia and South Ossetia.  On the Russian market’s love of dill, playfully referred to as ‘dill plague’ by those not inured to its taste.

PHOTO: A woman in Moscow passes by a poster depicting Russian President Dmitry Medvedev dressed as a superhero with the slogan “Captain Russia, the first Lord.”