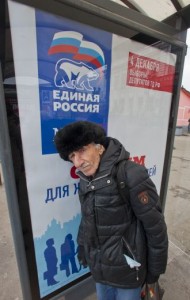 A former translator for Ria-Novosti has resigned after he was allegedly ordered by the Kremlin not to translate ‘harsh stories about Putin or United Russia’.   The company has denied that one of its outlets was ordered to ‘soften’ texts translated from foreign media which were critical of the ruling elite.  According to the Moscow Times, the head of the Central Elections Commission, Vladimir Churov, has banned campaign ads by opposition parties on state television, despite not disposing of the authority to do so.  Russia has rebuffed international concerns that foreign monitors of its parliamentary elections would be limited by announcing that all 650 international observers will be able to monitor Sunday’s vote.   The BBC reports on election fraud in the region of Tambov.  This article suggests that with the highest Internet penetration in Europe, the web could be a fertile ground for Russia’s political opposition.   A former member of United Russia has brought attention to his critical stance on the party of ‘corruption and theft’ by attempting to sell his membership card for one rouble on the Internet.  A Russian opposition activist has been sentenced to one and half years in a penal colony for attacking a police officer during an unsanctioned rally in central Moscow last year.

The new report from Hermitage Capital on the death of Sergei Magnitsky supports the thesis that the company’s lawyer was beaten to death by prison guards in 2009 and did not die as a result of health problems, as previously claimed by the authorities.  The Kremlin’s Human Rights Council will apparently set up a contact group with Russia’s Investigation Committee to monitor the investigation into the 37-year-old’s death.  In a sign of the international attention the case has gained, a permanent exhibition at the Checkpoint Charlie Museum in Berlin has been established to honor the memory of the lawyer.  Prosecutors in Tomsk are apparently considering banning the ‘Bhagavad Gita as It Is’, the handbook for the Hare Krishna religion as an example of extremism.  RFE/RL talks to gay activists opposing St Petersburg’s new anti ‘homosexual propaganda’ legislation.

Following a NATO cross-border air attack that killed 24 Pakistani soldiers, Russia’s foreign minister Sergei Lavrov has told reporters that a nation’s sovereignty should always be upheld, even when neutralizing ‘terrorists’.  Lavrov also stated that Russia is against imposing an arms embargo on Syria.   Damascus has said that it is ready to accept Russia’s role as intermediary in the  resolution of the current political crisis in the country.  President Medvedev’s recent bout of anti-NATO saber-rattling has ‘no relationship to any real military threat or to Russia’s current capabilities’ says a Moscow Times op-ed.  A fourth and final test launch of the Bulava intercontinental missile scheduled for Monday has been postponed.  It appears that in the hotly-disputed South Ossetian presidential elections, the Kremlin’s favored candidate, Anatoly Bibilov, may have lost out to Alla Dzhioyeva.

Josef Stalin’s only daughter has died of colon cancer aged 85.

PHOTO: A Muscovite waiting at a bus stop sporting a campaign billboard by United Russia. Ads by other parties fared worse, with elections chief Vladimir Churov banning some despite having no power to do so.  (Vladimir Filonov/MT)