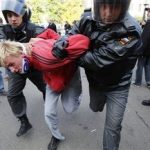 A rare authorized gay rights rally in Moscow on Saturday culminated in the arrest of 40 people.  Ria-Novosti reports that the arrested were rally opponents wielding tomatoes and paintball guns. RFE/RL says the authorities are still evaluating how many were actually participants in it.    Authorities in the province of Arkhangelsk have banned all gay rights demonstrations in a move ‘warmly supported’ by the Russian Orthodox Church.  Studio 306, via the Other Russia, has an interview with Moscow’s correspondent for Newsweek on the Voina art collective and how the Kremlin attempts to co-opt the movement whilst punishing its practitioners.   According to the Observer newspaper, Britain has introduced a secret blacklist on at least 60 Russian officials who are implicated in the 2009 prison death of lawyer Sergei Magnitsky, replicating an official US policy.  The Telegraph has apparently received a document which outlines how the FSB authorized the ‘elimination’ of enemies of the Russian state living overseas and oversaw the creation of special units to conduct such operations.  The New York Times reports on the possibility of a sixth wave of Russian emigration following the announcement that Putin will stay on.  ‘The result of all these things has been a mass out-migration of Russia’s most productive citizens and their families, with more than a million leaving in the last few years. Many more have vowed to leave if Putin becomes president again’ concurs the LA Times.  Ellen Barry authors here an astute analysis in which she suggests that the new regime under Putin resembles not the gerontocracy of the late Soviet period, nor a monarchy, but is rather an autocratic style very much akin to the regimes in Belarus, Kazakhstan, Uzbekistan, Turkmenistan and Azerbaijan.  ‘The extraordinarily opaque manner in which Putin made his decision to return as president is indicative of his aversion to democratic politics.  Russia will thus remain what the academics Steven Levitsky and Lucan Way have described as a “competitive authoritarian”’ regime, says Mark Kramer.  Under Putin, the notion of reform will perish, say many analysts, but reports like this suggest little in the way of concrete changes have been made under Medvedev.

Europe is, it would seem, still trying to coax Russia into backing sanctions against President Bashar Assad’s regime in Syria.  A new report by the Stockholm International Peace Research Institute suggests that Russia will experience increasing loss of influence over China as military and energy cooperation dwindle.  Draft evasion and the poor health of young men means that the military will significantly reduce the number of conscripts called up in the fall conscription drive.

The scourge of Russian summers, forest fires, are apparently raging: a state of emergency has been declared in the East Siberian city of Bratsk due to conflagrations in the region.  When Putin is a nominee, controversy is never far away: China’s Confucius peace prize has been cancelled.