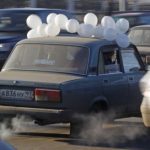 Sunday afternoon saw a rally of 200-300 (according to police) or 3,000 (according to organisers) drivers in cars decorated with ribbons, banners and anti-Putin slogans (calling him the ‘yellow earthworm’ and referencing rumours of his Botox treatments) driving around Moscow’s Garden Ring Road.  RFE/RL has some images.  Saturday saw a pro-Putin rally in Yekaterinburg of ‘thousands’, many of whom were bussed in ‘from outlying towns in the Urals industrial belt’.  The event was marked by ‘a notable lack of enthusiasm’, says this piece.  State Duma deputies maintain that elections official Vladimir Churov and United Russia are guilty of falsifying election results, but have have backed off from earlier calls that Churov should resign.  On the question of liberal nationalists, who believe that the opposition movement needs the nationalist movement in order to succeed.  The Yabloko party says that the office of its regional newspaper, the Vecherny Krasnokamsk weekly, has been destroyed following a firebombing attack.  The party is also in the process of filing a lawsuit against the Central Elections Commission in response to the refusal to validate Grigory Yavlinsky’s presidential bid.

A civilian doctor has been charged over the death in pretrial detention of Vera Trifonova – her family had hoped that prison officials would be held to account.  Human rights watchdog Agora says it counted over 850 instances of civil rights activists being persecuted in 2011, as well as over 4,000 demonstration-related arrests.  ‘No serious, organized political opposition has been allowed to emerge.’  In an interview with the New Times, Mikhail Khodorkovsky has called on Vladimir Putin to engage in dialogue with the opposition to promote ‘a new political philosophy of cooperation’.  Putin’s election campaign manager wants Dmitry Medvedev to take ‘an active part’ in the Prime Minister’s presidential campaign.  Although he doesn’t need the help, says Vladimir Frolov: ‘Putin is blessed with a lineup of pre-vetted opponents who have zero chance of upsetting his coronation next March.’

Reuters reports on Russia’s attempts to prevent regime-change in Syria.  Assad is the Kremlin’s ‘last remaining ally’ in the Arab world, but what will happen once the conflicts are over?  Russia has condemned the Arab League’s decision to suspend its monitoring mission in Syria amid increased violence (the League is seeking a complete withdrawal).  Sergei Lavrov has suggested that the Kuril Islands dispute with Japan be resolved with a referendum.  The British spy rock story has already been taken up and used in a new anti-opposition documentary by pro-Kremlin journalist Arkady Mamontov.  Speaking at the World Economic Forum in Davos, First Deputy Prime Minister Igor Shuvalov criticised Russia’s political system, but called for only moderate changes.