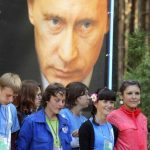 Interior Minister Rashid Nurgaliyev is calling for limitations on and monitoring of the Internet that would help preserve traditional values, saying that Russia’s youth ‘have forgotten the love songs of old, the waltzes, everything that united us, our background and our roots’.  He also expressed concern over the extent of online extremism, claiming that there are currently 7,500 extremist websites active on Runet.  Russia has indicated that it would not support sanctions against Syria, but may not oppose a U.N. resolution against current violence.  Vladimir Putin’s suggestion of a union with Russia and Belarus gives Alexander Lukashenko ‘a chance to pose as the defender of Belarusian sovereignty and try to rebuild his tattered support,’ says the FT. Belarus’ foreign ministry say it ‘does not consider it necessary to comment on [Putin’s] statement’.

Is the decision to re-open the case of Sergei Magnitsky a form of ‘legal cynicism’, giving the court a chance to clear the names of the officials currently accused?  The officials in question all appear on the ‘Cardin list’, which could be expanded to include more senior officials, says Yulia Latynina.  Russia is refusing to accept Polish criticism regarding its involvement in the Smolensk plane crash; the Interstate Aviation Committee insists that the pilots were put under ‘psychological pressure’ to land by the commander of the Polish air force.  A military analyst considers the possibility that the Nagorno-Karabakh will lead to war.

The Central Elections Commission is planning to set up polling stations at military bases in Abkhazia and South Ossetia to allow inhabitants to vote in the December Duma elections.  The leader of North Ossetia says that he has ‘no doubt’ that, given the chance, South Ossetia would choose to accede to Russia.  The BBC visits Sakhalin, reporting on aspects of its Sino-Russian history, and noting that its ‘run-down infrastructure’ gives it the appearance of a typical Russian town.

Tim Barrow is the new British Ambassador to Russia, due to take up the post in November.

PHOTO: Participants pass a poster of Russian Prime Minister Vladimir Putin during his visit to the summer camp of the pro-Kremlin youth group “Nashi” at lake Seliger, some 400km (248miles) north of Moscow, August 1, 2011. REUTERS/Mikhail Metzel/Pool