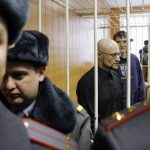 One year on, the Washington Post reports on the grisly fall out of last year’s Halloween-themed Strategy 31 protest, which saw a number of organizers detained.  A Moscow court has sentenced a Muslim man from the North Caucasus to twenty years in a high-security prison for the murder of an ethnic Russian following a football match last year, the culmination of a trial which has highlighted ethnic tensions.  As a new wave of nationalists marches loom, two city courts have also jailed eleven other radical activists accused of participating in December’s race riots.  Three members of the Other Russia opposition group, which has no links to nationalism, were among those sentenced, prompting outrage from the organization.  The Interior Ministry has threatened it will take action against former Mayor Yury Luzhkov if he continues to ignore appointments for questioning as part of an investigation into an alleged $430 million bank fraud.  Prime Minister Putin has told an audience of financial police officers that anyone who is guilty of corruption should have their face ‘smashed.’  The Moscow Times looks back at President Medvedev’s hapless forays into promoting his own agenda.  Could the decision to not put the clocks back, which has apparently created waves of confusion across Russia, end up being the salient feature of his legacy? Kyrgyz Prime Minister Almazbek Atambayev, known in his homeland as ‘another Putin’, is apparently in poll position to take the Presidency following this weekend’s elections.  Kyrgyzstan’s outgoing president has told the press that participation in Putin’s Eurasian Union is an inevitable necessity.  Beleaguered Syrian President Bashar Assad has thanked Russia for its veto on a European-backed U.N. Security Council resolution introducing sanctions against the regime.  A liberal party in Serbia has called for the expulsion of the Russian ambassador, Aleksandr Konuzin, who has gained a reputation for fanning the flames of Serbian nationalism, after he appeared at a nationalist gathering.

The Canadian Parliament is apparently considering a bill to implement the Magnitsky blacklist.  Garry Kasparov reports back from his trip to Washington.  Politico offers ten reasons why the US must take Russia into account.  The Washington Post reports on the visit of Alec Ross, America’s ‘digital diplomat’ to Russia, during which he noted how strongly the Kremlin desires to monitor Internet usage.