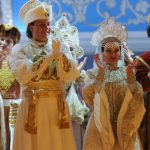 More than 5,000 policemen will be deployed in Moscow today to safeguard public order during the celebration of National Unity Day, which may attract up to 10,000 nationalist marchers.  An integral part of Russia or a burden?  RFE/RL examines the conflicting views on the Caucasus voiced by factions planning to attend today’s rally.  The news that prominent anti-corruption blogger Aleksei Navalny plans to attend has been blasted by some fellow liberals as an unsavory flirtation with chauvinism, but accepted by others as an attempt to appeal to some of the ‘popular’ elements within the political spectrum.  Click here to see an interview with members of radical art collective Voina on their latest work from Prague.  The BBC looks at the blossoming of Russian satire thanks to Youtube videos.   How the Kremlin’s new ‘anti-terrorism’ law is being used against its own citizens.   ‘The Russian president […] has moved Moscow one hour farther away from Berlin, Paris, London and New York — just as it has moved Moscow farther and farther away from such Western cultural values as transparency, human rights and the rule of law’: the words of Masha Gessen in the New York Times.

Russia has continued to voice heavy criticism of the guilty verdict against Viktor Bout.  Links to the KGB, to top customs officials?  This analysis provides an insight into why Moscow wants the arms dealer returned to his homeland.  The Kremlin has established its response to the U.S. travel ban on Russian officials allegedly implicated in the death of lawyer Sergei Magnitsky; a list of eleven names of individuals apparently linked to Guantanamo Bay.   A new intelligence report released by Washington has apparently found that Chinese and Russian intelligence services, as well as the countries’ corporate hackers, are the most persistent cybercriminals in the world, intent on the theft of American trade and technology secrets.  On Russia’s wikivote, which the Kremlin views as ‘direct democracy’, this article suggests is potemkin political debate.

‘Disgrace!’: a dubious premier for the newly renovated Bolshoi ballet.

PHOTO: Run-through of Ruslan and Lyudmila opera at the Bolshoi Theater in Moscow. (RIA Novosti/Vladimir Vyatkin)