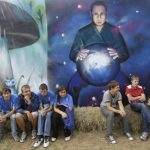 Mikhail Prokhorov’s election campaign to garner support for his Right Cause party has apparently attracted a lot of nationalist supporters, forcing the party to make a statement refuting their membership.  In response to the two recent riverboat tragedies, prosecutors have compiled a list of things that threaten safety on Russia’s waterways – many ships are not subject to regular inspections; some sport counterfeit software.  Interpol is seeking the arrest of a former United Russia lawmaker over accusations regarding sham mortgages.  Lawyers for Sergei Magnitsky’s mother say that evidence relating to his death has been falsified with the inclusion of ‘a new disease, which has no medical evidence’.

In urging ‘all sides to act with utmost restraint’, the U.N. Security Council’s statement on Libya gestures to Russia’s call for a balanced statement that apportioned blame to both sides.  President Dmitry Medvedev called U.S. President Barack Obama to wish him a happy 50th birthday and to chat about Russia’s WTO plans.  Obama wants potential blocking issues on accession to be resolved by the end of the year – although the U.S. does not remove Russia from the Jackson-Vanik amendment, many of its WTO-purpose concessions could be canceled.