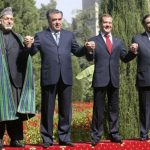 The New York Times reports that investigators have charged former police officer Dmitri Pavlyuchenkov with providing surveillance information and a murder weapon to the killer of journalist Anna Politkovskaya, who was slain in 2006.  Sources claim that Pavlyuchenkov also named the mastermind, whose identity was not revealed to media sources.  The Power Vertical examines how opposition politicians plan to profit from United Russia’s decline in popularity.  In addition to the ruling party’s popular woes, on Friday State Duma Deputy Alexei Lebed quit the party, accusing it of quashing internal dissent.  He is the second party member to leave in a week.  On United Russia’s pre-election strategy.  Billionaire and Right Cause party leader Mikhail Prokhorov has voiced his concern about concentrating control of media outlets.  The owner of the New Jersey Nets may run for president next March, if Right Cause finds itself in a competitive position.  In what appears to be a homage to Stalin, the Communist Party has set up a corruption hotline designed to ‘blacklist’ those suspected of graft.

Reports of thinly-veiled acrimony have drifted back from Saturday’s meeting of the CIS to ‘celebrate’ twenty years of cooperation.   Belarus’s President Alexander Lukashenko was, in particular, conspicuous by his absence.  Apparently the draconian leader plans to free political activists from jail in an attempt to assuage the European Union.  At the summit in the capital of Tajikistan, Dushanbe, President Medvedev criticized the ‘double standards’ of the election monitoring group of the OSCE, which has taken issue with electoral transparency in several post-Soviet states.  The President also stated that the fate of Afghanistan and surrounding nations should be decided by regional powers, in ostensible criticism of heavy U.S. engagement.  Russia’s envoy to NATO, Dmitry Rogozin, sees energy at the root of the alliance’s war effort in Libya.  Meanwhile Russia agreed with Tajikistan to extend the deployment of its military base in the country, a move designed to maintain Moscow’s influence in Central Asia following the withdrawal of NATO troops from Afghanistan.  Foreign Minister Sergei Lavrov told the media that the US fails to cooperate with Russia on the thorny issue of anti-missile defense.

This weekend, 2.5 million people apparently took part in peaceful celebrations of Moscow City Day, an event to celebrate the capital’s birthday.  ‘We know we are skirting the edge of the law’: the New York Times reports on how the group City Without Drugs uses extreme methods to tackle addiction in Yekaterinburg.