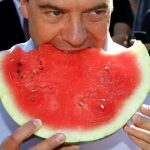 Authorities in Kaliningrad seized 40,000 copies of a local newspaper for carrying an open letter to President Dmitry Medvedev insisting that he fire Governor Nikolai Tsukanov and his local government, and accusing officials of criminal activity and nepotism.  Medvedev suggested that any goodwill shown by Georgia in relation to Russia’s WTO bid could help restore economic and diplomatic ties between the two countries, but also said he believes that Georgian President Mikhail Saakashvili deserves to face an international tribunal for his role in the start of the 2008 war.  VOA reports on tensions and tragedies around the border between Ergeneti and South Ossetia, as the President insists that there are no plans to make the breakaway republic part of Russia.  Medvedev has warned that the President of Syria faces ‘a sad fate’ if he fails to restore peace and ‘set up a modern state’, and the Foreign Ministry has spoken out about outside interference in Syrian affairs.  Sergei Petrov defends his hunch that Russia will not survive in its current borders through to 2020 as ‘clear-headed, objective analysis’.

The International Herald Tribute reports on Russians’ reliance on the European Court of Human Rights and the English High Court, and Russia’s overall being ‘increasingly guided by international treaties and commercial realities’.  ‘Corrupt’ and ‘lazy’ police are forcing locals in Sagra to take the law into their own hands.  A further appeal against the second conviction of Mikhail Khodorkovsky for fraud has been turned down.

A magnitude 6.3 earthquake hit the Pacific Ocean near the Kurile Islands yesterday. Players of a new online game, ‘Like Putin’, can tackle forest fires and drive around in a Lada.  Forest fires are currently covering 231 hectares in Siberia and 2,489 hectares in the whole of the Far East.

The President received support for his anti-beer drive in the form of a ‘female flash-mob’ yesterday, who stripped in Moscow in exchange for the contents of the beer bottles of passers-by.