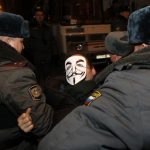 The New York Times reports on how Kremlin critics putting on an ‘Occupy Wall Street’ style protest in Moscow over next month’s parliamentary election has been dispersed by police.  The small number of protestors present were apparently overshadowed by the other congregation of the day, the re-enactment of a Red Square military parade in 1941, following which soldiers marched until they reached the front lines and began battle with the invading Germans.  Another historical anniversary, that of the 1917 Bolshevik Revolution, was marked in the region of Irkutskby by 400 protestors decrying United Russia and demanding the resignation of Russia’s leadership.  According to this article, a Levada poll has shown that Prime Minister Putin’s approval rating has fallen to its lowest level in more than a decade and support for his ruling party dropped sharply over the past week.  The party of ‘crooks and thieves’ has been called up for producing posters almost identical to those used by elections officials to encourage people to vote in Moscow in an apparent attempt at subliminal advertising.  Has the party invented a Facebook page for Volgograd’s Motherland monument to sing its praises?   A Just Russia leader Sergei Mironov and Rot Front head Sergei Udaltsov went head to head this weekend in a debate on Dozhd television, during which the former made explicit his intention not to support Putin’s return to the Presidency.  Reports are already circulating about a possible violation of voting laws, with the news that regional officials in Voronezh have allegedly asked subordinates to confirm in writing that they will vote for United Russia.

Incarcerated Yukos founder Mikhail Khodorkovsky has said he would never admit he is guilty of the crimes he was convicted of in exchange for early parole.  The Moscow Times reports that documentation found in Moammar Gadhafi’s former intelligence headquarters in Tripoli reveal a relationship between the regime and convicted Russian arms dealer Viktor Bout.  The Washington Post has a video interview with James Lewis, director of the CSIS Technology and Public Policy Program, on the ‘substantial’ damage cyber-espionage perpetrated by China and Russia has inflicted upon US military, economic, and political secrecy.

On the Krasnodar region’s new means of tackling infant abandonment: baby boxes.  The Bolshoi ballet restoration has been in the spotlight of late; now St Petersburg looks ready to take center stage with the creation of a $629 million cultural complex, set to open in fall 2012.