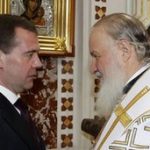 As Russia celebrated Christmas this weekend, the head of the Orthodox Church, Patriarch Kirill, apparently told the country’s leaders to respond to the concerns of the protest movement in a televised address on the state-run Rossiya-1 TV channel.  ‘It would be a very bad sign if the authorities remain insensitive to the sentiments of the protests – a sign of their inflexibility’, the leader warned.  Opposition figurehead Alexei Navalny has, according to the New York Times, been the victim of a smear campaign in the form of damning, doctored photos.  One in which he is seen standing next to exiled tycoon Boris Berezovsky, which was published in a newspaper distributed in Yekaterinburg, has been proved a fake.  The Wall Street Journal reports on how the Internet has helped facilitate not only the social widening of the opposition movement, but has also provided a valuable funding mechanism, in that it allows donors to remain largely anonymous.  Around one hundred people gathered at a “Fed-up” rally in Moscow’s central Bolotnaya Square, to call for fair presidential elections.   Moscow’s Tverskoi Court has ruled that the administrative arrest of Left Front activist Sergei Udaltsov was lawful.  Paul Starobin in the Boston Globe says history ‘suggests that what looks like a harbinger of democratic change can be better understood as something else: a familiar drama pitting the father of the nation against a flock of discontented children’.  Sochi Federal Judge Dmitri Novikov describes to the Other Russia the heavy penalty he paid for attempting to expose corruption in the judiciary.

The Russian Foreign Ministry has voiced its concerns about calls for former Egyptian President Hosni Mubarak to face the death penalty.  Syrian authorities have lauded the visit of a Russian naval task force to the port of Tartus to replenish water and food supplies as a ‘show of solidarity with the Syrian people’.  The failure of the Phobos Grunt space probe may be due to a lack of funding, speculate some industry experts here.

Police in the city of Bryansk have reported the death of an 18-month-year old child when a sidewalk collapsed due to a ruptured pipe.  Faulty construction of the pipe system, says the Washington Post, may have been the cause.