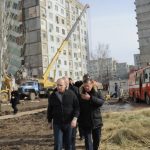 The State Duma approved, 242-2, a sweeping political reform to reintroduce the direct elections of governors.  In an interview with Izvestia, former Central Elections Commission head and current ambassador to Latvia, Alexander Veshnyakov, admits that voting fraud allegations rarely make it to court.  This Reuters report discusses allegations of voting fraud last December, and the unprecedented number of monitors who have signed up to observe this Sunday’s elections.  Tatyana Ivanova, who publicly reported that she had refused to comply with orders to falsify the results of December’s vote, is awaiting her court day.  Russia may soften its stance against action on Syria after the vote.  The WSJ profiles Mikhail Prokhorov: ‘In a country with an average wage of $700 a month, Mr. Prokhorov embodies what millions of Russians hate.’  Primorye Governor Sergei Darkin was removed from his post yesterday, likely due to his unpopularity.

‘Russia’s creative elite is afraid of incurring the authorities’ wrath, as if they still live in the Soviet Union.’  The BBC has compiled a series of profiles of Russian faces to watch, including insiders, opposition figures, and activists, and reports separately on the insecurity and fear caused by criminal gangs who collude with police.  The Georgian President says he wants to scrap visa requirements for Russian visitors.  The newspaper Pravda has published a scathing attack on U.S. Secretary of State Hillary Clinton, calling her a ‘trucker-type’.  Poland has acknowledged worsening relations with Russia.

A former police official suggests that London exiles were behind the killing of Anna Politkovskaya.  Russian Youth Agency chief Vasily Yakemenko has won his defamation case against the man who accused him of being behind the 2010 attack on journalist Oleg Kashin.  Prime Minister Vladimir Putin has called for an investigation into the blast at an apartment block in Astrakhan, where the death toll has risen to 10.  Doubts continue to hover around the news of Putin’s assassin plot; ‘the facts don’t quite add up,’ says RFE/RL.