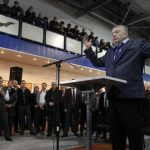 Pro-government activists won permission to hold rallies on all of Moscow’s major squares on election day, which will effectively bar opposition activists from using the same space – Left Front leader Sergei Udaltsov says that the door to the mayor’s office had been closed to the opposition.  Hackers have shut down an opposition website containing details of a February 26 Moscow rally.  President Dmitry Medvedev’s meeting with opposition leaders does not indicate that the Kremlin is serious about reforms, and did not lead to any breakthroughs, analysts concluded.  Medvedev, for example, rejected demands for new parliamentary elections.  The Foreign Ministry says that Russia will not participate in the Friends of Syria summit this week because it has ‘unclear’ goals and lacks government representation, but is urging the United Nations to send a special envoy to coordinate security issues.

Stanislav Belkovsky reviews Ekho Moskvy’s chances for survival.  Gay rights activists painted a rainbow on the United Russia party headquarters in Moscow over the weekend in protest of St Petersburg’s moves towards passing a law that would ban homosexual ‘propaganda’.  Does a new bill on holding early Duma elections ‘marginalise the opposition’?  State-run VTsIOM is predicting that Vladimir Putin will win the presidential elections in the first round of voting with 58.6%.  ‘It does not help, for example, that Mr. Prokhorov’s wealth, from running a mining company, is directly tied to the natural resources that a large part of the electorate believes were stolen from them in the 1990s.’

Locals are debating the development possibilities offered by the historical zone next to the old Rossiya Hotel. Russian scientists have regenerated a 30,000-year-old plant from a seed frozen in permafrost.

PHOTO: Vladimir Zhirinovsky (front), presidential candidate and leader of the Liberal Democratic Party of Russia (LDPR), addresses workers during a visit to an aircraft engine factory in Moscow February 21, 2012. Russians will go to the polls for their presidential election on March 4. REUTERS/Sergei Karpukhin