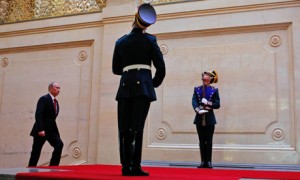 Vladimir Putin has, according to Reuters, stormed back into action as President with a plethora of decrees urging the swift shake up of Russia’s economy.  Perhaps he too has been reading the articles of late which have highlighted how precariously dependent his reign is on oil, unless he chooses to follow Kudrin’s line and seeks economic stability elsewhere.  From Bloomberg:

The European Union, Russia’s largest export market, is grappling with its worst crisis in decades just as the struggling world economy puts a cap on crude prices. That threatens his ambition of turning Russia into one of the world’s five largest economies by purchasing power by 2015.

The Russian leader benefited from an almost fivefold jump in Urals crude during his first stint as president, from 2000 to 2008. The surge swelled state coffers, allowing Russia to recover from its 1998 default and spend more on military, infrastructure and social programs. The main stock index soared more than 1,000 percent.