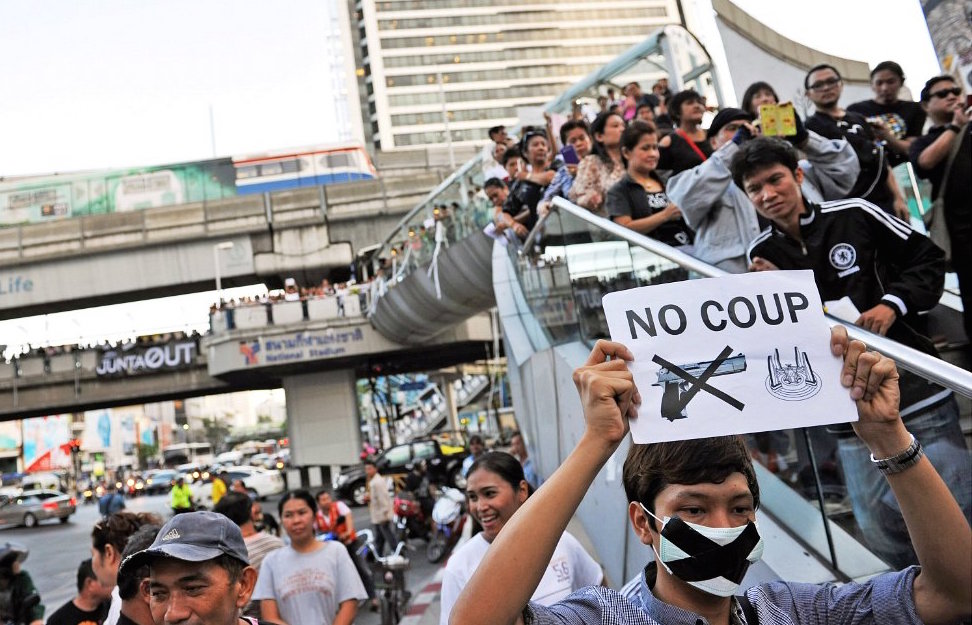 The Thai military coup of May 22nd 2014 had been months, if not years, in the making. Ever since PM Yingluck Shinawatra’s landslide election win in July 2011, it had been clear – to all those who were willing to see – that the Thai people’s genuine commitment to democracy was doomed to be usurped by the wealthy entrenched establishment and their willing henchmen in the Thai Army.

That establishment – known in Thailand as the amaart – had been growing in desperation since the July 2011 election and had used every trick in the book to dislodge the Thai people’s democratically elected government. Nothing seemed to be beyond the pale as they pushed PM Yingluck’s government to the brink during the middle of catastrophic natural disasters, upended what little remained of the Thai judiciary’s credibility and openly used some of the country’s most vicious gangsters to terrorise the people of Bangkok during the openly anti-democratic “PDRC” protests in the months that preceded the coup.

One key carefully choreographed theatrical backdrop to all this was the amaart’s desire to rid the country of a hugely popular agricultural subsidy scheme – the rice pledging policy – with the Western media falling in behind the Thai establishment’s line that such redistribution of wealth was an “economic disaster”. That no agricultural scheme on earth is expected to return direct profits back to the governments who spend on them seemed to be forgotten in the desperate need to find some kind of rationalisation to explain “why” a coup was required. That the rice pledging policy had had such an overwhelming democratic mandate from the Thai people in the July 2011 election was even more cause for it and PM Yingluck government’s destruction.

But the key definer of the May 2014 coup was that it was the ultimate desperate act of a Thai amaart who realised that its influence and grip on events was in danger of complete collapse. The military intervention itself was the concrete, lived expression of the amaart’s inevitable decline into irrelevance.

Since the May 2014 coup Thailand has descended into an increasingly dark and absurd version of North Korea, complete with luxury spas and a strutting army general, Prayuth Chan-ocha, playing the willing role of demented & draconian dictator.

From publicly threatening journalists through to banning the public eating of sandwiches, General Prayuth’s rule has also been marked out by arbitrary mass arrests, military courts for civilians and torture of dissidents. Prayuth’s ability to veer from surreal comedy to the darkest arts of military dictatorship has reduced Thailand’s status to that of an international pariah, the reputation of its democracy-loving people laid low by their incompetent, illegitimate and abhorrent leaders.

And what of the Thai people’s chosen and legitimate leaders? At the moment the latest act in the amaart’s tragic farce is the criminal prosecution of PM Yingluck on “corruption” charges for implementing the very rice pledging scheme her government had been mandated to implement by the Thai people. The court has even made it clear PM Yingluck is not standing trial for any personal “corruption” but for failing to prevent “alleged graft” within the scheme itself. Yet, despite almost a year of investigations, even that “alleged graft” has appeared piecemeal and relatively small-scale, falling well within the parameters of “corruption” other nations experience in such subsidy schemes. The obvious difference is that those nations go directly after the small numbers of criminals involved in such graft and don’t use such crimes as a rationale to overthrow democracy, rule of law and enforce military rule on their people.

Some observers have wrongly called the Yingluck prosecution a vendetta against the Shinawatras, failing to see that the wider purpose of this trial is, in fact, a vendetta against the Thai people and democracy itself. The message is clear that the Thai people can vote in huge numbers for lawful, redistributive policies and the amaart will remain more than willing to use brutal force to crush their democratic choices, imprison their leaders and suspend the rule of law.

The Yingluck trial is an attempt to cement the destruction of Thai democracy and to “discipline” the Thai people’s expectations. As much as the Thai amaart seeks to control their nation’s past by covering up their roles in terrible crimes such as the 2010 Bangkok Massacre, they also have to control the future by making it clear that genuine democracy won’t be tolerated and that any government seeking to work according to a democratic mandate can be prosecuted at anytime and via illegitimate means.

Yet, one year on from the amaart’s latest attack on their own people, the Thai establishment still haven’t realised that the ground beneath their feet is rapidly diminishing. The will of the Thai people has not been broken and their yearning for democracy and accountability remains. This, if anything, is the real lesson of the May 22nd 2014 coup.