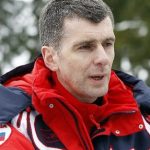 Just because it’s fun to conjecture about a parallel universe in which Vladimir Putin, Dmitry Medvedev, Igor Sechin, Alexei Kudrin et al are not manning the controls of the Kremlin, here are a couple of enticing, if improbable, alternative cabinets presented by Russia’s political ‘opposition’.  As the owner of sports giants the New Jersey Nets, Mikhail Prokhorov is no stranger to the concept of the dream team.  As head of the Right Cause party he got the ball rolling on Sunday by naming some of the people he will include in his shadow government in the run up to the December elections:

Not to be outdone, via the Moscow Times, we have the Young Socialists, the youth wing of a Just Russia, presenting their favored ministerial choices.  Kudos for the Navalny idea.

The Young Socialists of Russia on Monday published its vision of a shadow cabinet, which it dubbed a “Government of People’s Trust Without Putin.”