At Lake Seliger, Opposition Refuses To Take The Bait 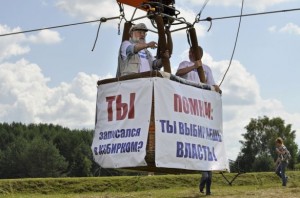 The annual Nashi youth camp held at Lake Seliger has, since its inception in 2005, traditionally served as a breeding ground for eager young Putin acolytes. Whilst typically offering spectacular views of the lake and alarmingly Riefenstahlesque scenes of mass gymnastics, the Moscow Times notes that this year the camp has somewhat changed its emphasis.  With a new logo in the colour of Putin’s least favourite revolution (orange), it has made a major effort to diversify its appeal.

Whether this is simply another nail in the coffin of Nashi (which has for some time been weakening as an arm of state apparatus), a genuine effort to bend to the new political climate, or a sign that the Kremlin has calculated that acknowledging the opposition might be a way of disabling it, its detractors are unconvinced by the re-brand move:

And for all his efforts, attracting the opposition to a place with such a pro-Putin reputation was a tough sell. Alexei Navalny, an anti-corruption blogger and one of the most prominent faces of the opposition, immediately refused, as did most other pro-democracy activists.

“Seliger is firmly, hopelessly associated with the Nashi movement, which has been completely discredited both in the eyes of opposition activists and by society,” pro-democracy activist Ilya Yashin told the newspaper Nezavisimaya Gazeta.

One of the few anti-Kremlin guests to give a lecture at the camp this year was Ilya Ponomaryov, an opposition member of parliament and a leading figure of the street protest movement.

“Nashi members all know me because a few years ago my picture was hung on a pine tree to have darts shot at it,” he said.

But Ponomaryov said he was eager to attend the camp because he believed that the young, politically active members were ripe for genuine political discussion.

“I don’t see a difference between opposition activists and activists for Nashi, except for the fact that those who are in Nashi fell into the wrong hands and have had a bunch of garbage beaten into their heads,” he said.

But many question whether a Kremlin-approved dialogue can be a genuine dialogue at all. And most of the guests to the camp have been members of the ruling elite who concede the importance of “discussion” without truly engaging in it.