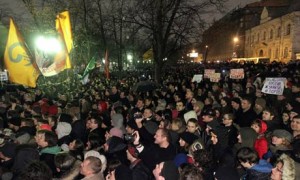 ‘Politically passive’, is how David Hearst from the Guardian describes the Russian protest movement, in an article in which he debunks comparisons between the Arab Spring and the Moscow demonstrations of the past two days.  Hearst discusses the idea of popular inertia with opposition figure Vladimir Rzyhkov:

‘What does he put this passivity down to? Communism, which destroyed Russian faith in each other, and consumerism which does roughly the same: “If there were a democratic force out there, it would already have made itself felt.”‘

Democracy Digest considers a new book by David Satter who also analyzes the imprint of the Communist past upon the consciousness of modern Russia.  He finds a historiographical deficit at the heart of the nation’s stuttering relationship with democracy.  Satter, however, draws a different conclusion on what we have witnessed erupt on the streets of Moscow:

The question of the Soviet legacy addressed at a Washington meeting this week (above) to mark the launch of It Was a Long Time Ago and It Never Happened Anyway: Russia and the Communist Past, a new book by Hudson Institute analyst David Satter.

In the West, the individual has an intrinsic value, whereas for Russians the individual is a means to an end and it is the state that is deified, said Satter.

While Germany has accepted that Karl Jaspers called its metaphysical guilt for the crimes of Nazism, no such process has taken place in Russia with respect to the Gulag and mass exterminations of Soviet communism, he said.

The book demonstrates that the “conventional wisdom that Russia’s political system is devoid of ideology is wrong,” said Miriam Lanskoy, the National Endowment for Democracy’s director for Russia and Eurasia.

“The powerful state is the driving force of Russian history – the goal of the society and every individual is to support the state,” she told the meeting. “The state is given an almost sacred role.  This ideology is consistent in Russian history from the Imperial period, the Soviet period, and today. “

Russia’s failure to address the past is an insuperable obstacle to creating a democratic future, said Satter.

But recent events may signal the start of a cultural shift.

“The appearance of 5,000 to 10,000 people in the streets of Moscow on Monday to protest fraud in the December 4 parliamentary elections is more than just a surprising event,” he concedes. “It signals the end of the era of Russian passivity.”