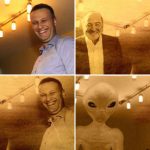 Stalin was known, amongst other predominantly murderous things, as a proponent of the political use of photo doctoring. We know this from the haunting gaps in Bolshevik-era photos in which a political rival once stood.  The idea of being erased from history was executed with untold skill by the dictator, who not only ruthlessly dispatched his enemies from their mortal coil, but also eradicated them from the rolls of films that might have testified to their one-time involvement in political life.

Vladimir Putin has observed the leader’s fondness for celluloid, but in a somewhat different fashion. If in one hundred years time one was to unearth the Prime Minister’s photo album in the absence of any knowledge about him, you might imagine he had been a actor sliding with seamless versatility from one role to the next, whose characters were captured in a series of finely-tuned publicity shots.  A set of photographs which are all imbued with the rosy tone of of the propagandist lens and the knowledge of a captive audience.

Now it seems the authorities are returning to the kind of trickery beloved of the man of steel.  It was reported by the New York Times today that anti-corruption blogger Alexei Navalny has been the victim of photo doctoring, as an image of him posing with tycoon Boris Berezovsky was printed in a Kremlin-backed newspaper, to suggest the golden boy of the opposition has unscrupulous links with unpopular figures.  What the New York Times points out however, is that the Internet’s trove of photo evidence is making airbrushing an increasingly unreliable method for the state’s media machine:

Mr. Navalny said it was a fake, and his assertion was supported when the original, unaltered photograph appeared on Russian Web sites. That, in turn, set off a flurry of parodies using altered photographs, including the image of the alien, all seeming to highlight the outdated nature of some Russian propaganda.

“Vladimir Putin and his team do not understand the Internet,” Mr. Navalny said in a telephone interview, referring to the prime minister.

We can but hope that the opposition, thanks to a sharp understanding of the web, can continue to determine its own exposure.