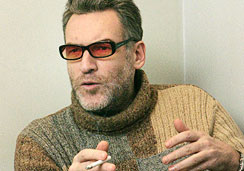 As up to 65,000 of Moscow’s pious prayed for the protection of the Russian Orthodox Church on the weekend, Kremlin critic and music journalist Artemy Troitsky was penning a sermon of his own.  ‘I am just as unsure about who is to blame and what needs to be done’, he starts his his clarion call in the Moscow Times.  This, however, is no reason to accept the status quo.  He argues:

If a convoy of official automobiles pushes through rush-hour traffic, honk your horn and shake a fist at them.

If government officials overstep their authority, gather witnesses and evidence and file a claim against them with the law enforcement officials. If you are a witness to corruption, post a video of it on the Internet.

We encounter corruption and lawlessness everywhere, and yet we all too often accept this behavior as a social or cultural norm. This inertia and apathy is destructive, and this is a particular pity when you consider that there are ample opportunities in Russia to organize grassroots movements.

Even if it is unfamiliar and difficult at first, it always feels good. We are just trying to live our lives. But there are many millions of us, and if we are courageous and steadfast, we will overcome. That is guaranteed.