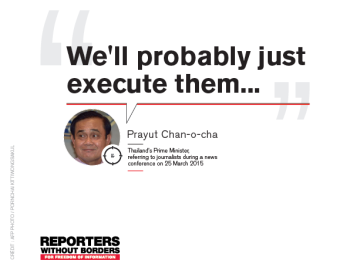 There is little doubt that the current military dictator of Thailand, General Prayuth Chan-ocha, ranks among the most odious pariahs on the international stage, who thinks nothing of simply announcing that he intends to murder journalists or anyone else who stands in his way. Here is a quick excerpt from the latest press release from Reporters Without Borders, titled “Leaders who publicly threaten journalists.”

Thailand’s prime minister, Gen. Prayut Chan-o-cha was asked at a news conference on 25 March 2015 what the government would do to journalists who do not stick to the official line. “We’ll probably just execute them,” he replied tersely.

Since imposing martial law in May 2014, Gen. Prayut has cracked down hard on those who defy his policies and defend the fundamental right to criticize. He has gagged reporters, bloggers and news outlets regarded as overly critical of himself or his military government. The growing hostility towards the media being voiced publicly by Prayut has drawn the entire world’s attention to his contempt for freedom of information and its defenders, regarded as a threat to the nation.

Prayut clearly does not think it is the job of journalists to question the government. On the contrary, speaking on 5 March, celebrated as “Reporters Day” in Thailand, he said journalists should “play a major role in supporting the government’s affairs, practically creating the understanding of government’s policies to the public, and reduce the conflicts in the society.”