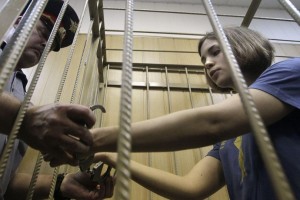 The following article was originally published on RealClearWorld.

The arrest, trial and continued imprisonment in Russia of the female punk rock band Pussy Riot has captured the attention of international media over the past year, but the story seems in recent days to have taken a dramatic turn.

Although it seemed as if not much more could happen to Nadia Tolokonnikova after she and her bandmates were convicted on charges of hooliganism last year, the Russian government’s repression has been extended. Almost three weeks ago, Tolokonnikova “disappeared” into the penal system — in transit, it is believed, to the ИК-50 prison colony in the Siberian city of Krasnoyarsk, deep in gulag archipelago — with no information provided to her family or legal team until she eventually resurfaced.

Her unexplained transfer to some of the worst prison conditions imaginable, thousands of miles away from her family, was prompted by a 9-day hunger strike and publication of an open letter in which she blew the whistle on inhumane prison conditions, including 17-hour work days, beatings and attempted suicides by desperate inmates.

It is difficult to say whether or not the continued arbitrary punishment of this young 23-year-old mother comes down from the top, or rather is the whim of a cowardly prison administrator, but what is certain is that Russia is a very dangerous place for whistleblowers — a system in which the rights of the individual are totally unprotected from the discretionary power of the state.

Whatever hopes may have remained that Putin would release political prisoners before the Sochi Winter Olympic Games are rapidly fading. Even while the world’s eyes are on Russia, it is evidently not a season of forgiveness judging by the Kremlin’s determination to punish the Greenpeace “Arctic 30” with charges of piracy and now, additionally, hooliganism.

Political trials in Putin’s Russia are driven by diverse motives, but united by the same broken system — which Mikhail Khodorkovsky once described as “the conveyor belt of Russian justice.” (Disclosure: I formerly served as counsel to Mr. Khodorkovsky.)

There are economic motives, from the massive theft of Yukos by Rosneft, down to more petty corruption by low level bureaucrats, such as the fraudulent tax rebate that eventually led to the murder of lawyer Sergei Magnitsky. There are geostrategic motives, highlighted by the spectacle being made out of the Greenpeace activists, seen as Russia’s unsubtle message about their expansionist ambitions in the Arctic. And of course, there are political motives, exemplified by the persecution of people like Khodorkovsky, opposition figure Alexei Navalny and the large group of Bolotnaya Square protesters, one of whom has already been subjected to punitive psychiatry for challenging the regime.

When state officials face no consequences for breaking rules, and when there is no predictable process or protections provided within the system, the only organizing principle that remains in the power structure is mutual incrimination. Corruption becomes the grammar of influence, and logic becomes the servant of power instead of reason.

It does not take a great deal of imagination to see how this system works. It is not just one individual who benefits, but a privileged community at the expense of the majority. If Vladimir Putin were to walk away from the presidency before the next election, Russian society would still face tremendous challenges from an entrenched group of clans with overlapping interests who are heavily invested in the country’s lawlessness.

This is perhaps the most important aspect for foreigners to understand about the persecution of the Pussy Riot girls — it does not make sense and the Russian government is even worried about it making sense. The ruling class reaps significant political benefits (at least domestically) by jailing these women and portraying Putin as a guardian of conservative, religious and nationalist values held by a large part of the rural population. It is a calculated and carefully measured sort of chaos that ultimately supports the regime’s aims to maintain the status quo.

Peter Pomerantsev captured this trend in a recent paper, commenting on the seemingly nonsensical variety of charges and convictions the Kremlin is able to push through the courts against its selected opponents. “This absurdity,” writes Pomerantsev, “appears to be deliberate. It proves to the public that the Kremlin can re-imagine reality at will, can say ‘black is white’ and ‘white is black’ with no one able to contradict.”

What sort of meaningful opposition can be mounted against such a devastating illusion of power, one that can create its own logic, its own form of justice and, of course, design its own consequences?

Russia‘s partners in the West — and indeed foreign investors looking to sink millions into Sochi advertising — need to come to terms with the fact that Russia is not improving, not modernizing and is far off the democratic path under the current leadership. With state control over the media, a rubberstamp Duma and a politicized judiciary, for the time being Putinism is here to stay, and the more external enemies the leadership is able to manufacture, the more comfortable they shall become to commit to the social, moral and economic decay of the nation.

Supporters of Pussy Riot are hoping and praying that they will be released at the end of their two-year sentence, if not before — but there always remains the threat of more trials and more bogus verdicts. The only true salvation, however, lies in the challenging task of transforming some of the fundamental notions held by many in Russian society. To achieve progress, the Russian people must unburden themselves from a difficult history, and divorce God and patriotism from the state.