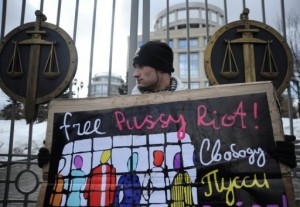 t’s official.  If the extension of the imprisonment of political protest group Pussy Riot is anything to go by, Vladimir Putin is scared.  Is that why the court today rejected a call for him to testify in their case?

‘Draconian justice in Russia has usually reflected weakness rather than strong rule. Pussy Riot’s treatment by a justice system controlled by the Kremlin reflects badly on a regime that is clearly afraid of the slightest threat to its power.’

‘[…] the Kremlin rules the only way it believes will guarantee its own continuing power: coercion, intimidation and force. But this is a sign of weakness, not strength.’

‘Putin is trying simultaneously to deter his opponents and to show his hardline supporters that he still has the will to crack down and can get the Duma to do his bidding. He is also signaling weakness, however.  In the past, buoyed by huge popularity and surging oil and gas revenues, he could afford to ignore the opposition’s sparsely attended demonstrations.’