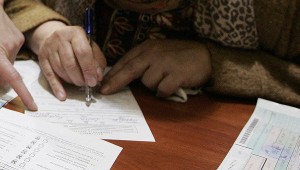 Earlier this week, the Guardian’s Moscow correspondent Miriam Elder wrote about her personal frustration with Russian bureaucracy.  She clearly hit a raw nerve when she dared to criticize the country’s dry cleaning establishments, because a day later, a withering riposte came through from Putin’s mustachioed prolocutor Dmitry Peskov, who demanded that Elder take note of the eons of red tape Russians must go through to secure a UK visa.  This comes, Elder argues, from a classic Soviet-era evasion tactic known as ‘whataboutism’.  She wonders though, as indeed many would, why it is that the Kremlin chooses to actively engage with relatively minor issues raised by foreign journalists, whilst refusing to acknowledge major ones:

I tried to reach Peskov several times today to ask him why of all the stories I have written, this is the one to which he decided to respond. Articles about widespread allegations of electoral fraud, which Putin’s critics say helped propel him and his party to power in recent elections, have been met with silence. Reports on human rights abuses by government forces in the troubled Caucasian republics of Chechnya and Dagestan: silence. Articles on the inconclusive investigations into the murders of journalist Anna Politkovskaya, human rights campaigner Natalia Estemirova, lawyer Sergei Magnitsky: nothing.

Maybe it’s just personal taste. Tony Halpin, Moscow correspondent for the Times, notes that in his five years in this post, the Times has received just one response from Peskov. The subject? The Swedish pop band Abba.
In early 2009, Tony wrote a light story about allegations that Putin had flown in an Abba cover band to play a private concert, doling out some £20,000 for the event.

“I don’t know who their audience consisted of, but Vladimir Putin was not one of them,” Peskov wrote in response. “He was actually working in his office that Thursday evening, meeting members of the cabinet.

“By the way,” he added, “Mr Putin is more of a Beatles fan than an Abba one.”