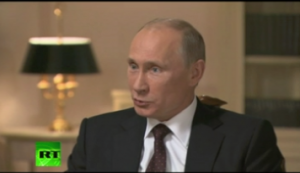 We have compiled some highlights from Vladimir Putin’s interview with Russia Today, which was broadcast yesterday.  This is Putin’s first interview since his inauguration, and as such, covers some of the hottest Russian news topics from recent months.  Highlights include Putin’s thoughts on the euro zone, Mitt Romney, missile defense, Sergei Magnitsky, Pussy Riot, corruption, and Julian Assange.

ON THE EURO ZONE: The euro zone is our major sales market. Should it shrink, our own production will immediately decrease. Therefore, our interest is in seeing the euro zone survive and our main partner-economies get back on track. We need Europe’s leading economies such as Germany, France and Britain to be in good shape. This is something that we’ll always keep an eye on. And this will be a primary topic for discussion at the Vladivostok APEC Summit.

ON MITT ROMNEY (who vowed to toughen his stance on Russia if he becomes U.S. President):  [H]e was obviously wrong, because such behavior on the international arena is the same as using nationalism and segregation as tools of US domestic policy.

ON MISSILE DEFENSE: [O]ur American partners keep telling us, “This is not directed against you.” But what happens if Mr. Romney, who believes us to be America’s number one foe, is elected as president of the United States? In that case, the missile defence system will definitely be directed against Russia as it is technologically configured exactly for this purpose.

ON SERGEI MAGNITSKY: [I]t is certainly a great tragedy that he died in prison. And there certainly must be a thorough investigation. If someone is guilty, they must be punished. But what I want to emphasize is that there is absolutely no political context to this case. It is a tragedy, but it only has to do with crime and legal procedure, not politics.

ON CRACKING DOWN ON POLITICAL DISSENT: If we talk of what some call a clamp-down … We should clarify what we’re talking about. If we understand it as a simple requirement that everyone, including the opposition, complies with Russian law, then this requirement will be consistently enforced.

Putin: Can you translate the first word into Russian? Or maybe it would sound too obscene? Yes, I think you wouldn’t do it because it sounds too obscene, even in English.

RT: I actually thought it was referring to a cat […]

Putin: I know you understand it perfectly well, you don’t need to pretend you don’t get it. It’s just because these people made everyone say their band’s name too many times. It’s obscene – but forget it. […] You know, Russians still have painful memories of the early years of Soviet rule, when thousands of Orthodox, Muslim, as well as clergy of other religions were persecuted. Soviet authorities brutally repressed the clergy. Many churches were destroyed. The attacks had a devastating effect on all our traditional religions. And so in general I think the state has to protect the feelings of believers.

ON CORRUPTION: What we need to start with is to make our entire society detest the very notion of corruption. […]  current legislation allows any Russian citizen to have a foreign bank account or property. Yet, limitations may be introduced for some officials, especially at a high-level. I don’t see anything extraordinary about this, especially in view of today’s realities. But the State Duma will have to present the rationale for their proposal and develop it into a detailed draft law. Overall, I believe this law has value and would assist the fight against corruption to a certain extent.

ON JULIAN ASSANGE: I won’t make a definitive statement, but as far as I know, Ecuador has requested guarantees from the Swedish government that Sweden wouldn’t hand over Assange to the United States. No guarantees have so far been provided. At the very least, this suggests that we are looking at a politically motivated trial.