Putin Takes It Out On Clinton 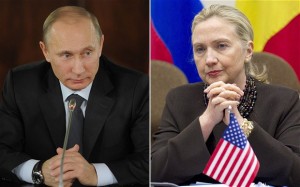 One tends not to think of Vladimir Putin as a sensitive soul, but with the level of negative energy surging towards him this week, many have taken time to consider what political coping mechanisms he may employ to deal with his new-found unpopularity.  Among the possible options: shifting the blame onto tweet-happy Medvedev (who seems to be doing rather a good job of it himself at the moment), shifting the blame onto United Russia, or, as Bloomberg suggests, rebranding himself entirely.  It seems, however, that today’s preferred option, is that of turning on Hillary Clinton.  In a ‘strikingly personal’ attack on the US Secretary of State, Putin rebuffed her suggestion that Sunday’s elections were ‘neither free nor fair’ with the following comments about the motivation of the protest movement.   From the Guardian:

“[Opposition leaders] heard the signal and with the support of the US state department began active work,” Putin said during a meeting with his All-Russia Popular Front, a new political movement set up to support his candidacy for the presidency in the upcoming election.

“We are all grown-ups here. We all understand the organisers are acting according to a well-known scenario and in their own mercenary political interests.”

When Putin addressed the United Russia congress almost two weeks ago, he similarly attempted to paint Golos as a bunch of foreign-funded mercenaries.  In that instance, whilst it was certainly an act of unashamed demagoguery, he could (albeit tendentiously) attempt to make his argument credible on the basis that Golos receives funding from Western agencies.  In this instance, whilst the Secretary of State has made her opposition to the orchestration of the election manifest, the idea that she is personally spearheading a shadowy grass roots campaign against the PM, which finds expression in the outbursts we have seen across the streets of Moscow, must seem wildly conspiratorial to even the most hardened Westernophobe.  Perhaps time to go back to blaming Medvedev?