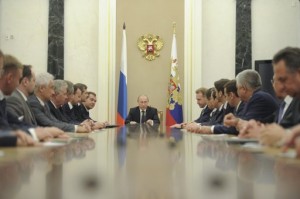 Vladimir Putin has announced his new Cabinet, stuffed with long-term loyalists.  Igor Shuvalov is second-in-command.  Arkady Dvorkovich is the new deputy prime minister, replacing Igor Sechin.  Vladislav Surkov, Dmitry Kozak, Dmitry Rogozin and Alexander Khloponin all keep their existing positions as deputies.  Here’s a selection of what various sources are saying about the Cabinet of cronies:

IGOR SHUVALOV: ‘While Shuvalov’s emergence as sole first deputy prime minister was taken as a clear signal that Putin is calling the shots, others speculated that his old adversary Igor Sechin would continue to wield influence from behind the scenes.‘ Shuvalov, who has been in government since 1997, is ‘widely recognized as a “Putin man.”’

KOLOKOLTSEV & OPPOSITION: ‘Critics said the new government showed that Putin – faced with the biggest street protests since the fall of the Soviet Union — was carrying on with the same approach as before. He had made no concessions to the opposition, they added, unveiling a cabinet made up of trusted loyalists and stooges.‘ The New York Times says that Putin’s promotion of Moscow’s police chief to the post of interior minister ‘endors[es] his work in keeping protests in check, and signal[s] to the opposition that he will brook no dissent in his six-year term. “He’s known as the man who kept order during the protests, and that is what’s important for the Kremlin,” Andrei Soldatov, an author and expert on Russia’s security forces, said of Kolokoltsev.‘

HINTS OF LIBERALISM?: Anders Aslund optimistically views Putin’s new Cabinet as surprisingly liberal, noting that most of Medvedev’s former team are still in place: ‘The old cabinet was stacked with ministers considered highly corrupt, including former KGB officers and Putin cronies from his days in the St. Petersburg city government. With a couple of exceptions, they are all gone. Despite some suggestions that the new cabinet represents Putin’s attempt to solidify his control over the new government, the group is in fact dominated by liberal technocrats. […] Another remarkable change is that half a dozen heavyweight ministers with a reputation for serious corruption have been sacked.’

The NEW YORK TIMES notes that many of Putin’s most unpopular cronies have been ousted from the Cabinet but maintain administrative positions, including the exiled Rashid Nurgaliev as undersecretary of the presidential Security Council: ‘Nurgaliyev has faced massive public criticism over widespread incidents of torture and other abuses by police, while Golikova and Fursenko have been linked to the worsening state of the nation’s healthcare and education systems.‘

FORMER PM MIKHAIL KASYANOV tweeted that the new government was ‘the familiar “Putin 2.0 version” from 2004-2012. “The policy … is to press on business and citizens.”‘

RFE/RL has compiled a Who’s Who of key players.