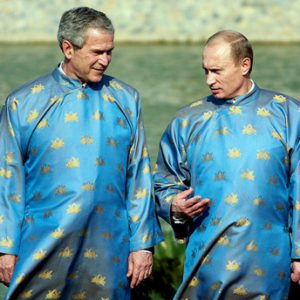 The Economist has the latest in a spate of articles this week speculating that Prime Minister / President / President / Prime Minister / incumbent President Vladimir Putin’s time may be up, following his admissions at last week’s Valdai Club dinner that perhaps the current system of government leaves much to be desired in the way of freshness, vision, and innovation (to put it mildly).  The broad disapproval of the Valdai dinner attendees, which included Boris Nemtsov, prompted the opposition figure to comment, ‘I don’t see any gap between what I’m saying and what everyone else here is saying.  We’re all in the opposition now.’

Putin has been riding for some time now on the coattails of the stability that accompanied his reign (more thanks to burgeoning oil prices and the government’s dependence on energy industry for its income, most any spectator will argue – the Economist notes that ‘the economy was recovering before Mr Putin came to power’), and the turnaround from the days of instability governed by Boris Yeltsin have led Russians to associate him with prosperity.  But that all seems to be changing, at long last.  This week’s encouraging Levada poll suggests that a quarter of Russians now see Putin as having built up a cult of personality around himself – the highest such percentage of skeptics counted in the last five years of surveys.

With a dwindling support group that is ‘largely passive and based on a lack of alternatives’, what does the future hold for Russian politics?  Well, another term for Putin, almost certainly.  But, says the Economist, the growing threat of a catastrophic turn once Russia’s structural economic failures start to hit home:

Mr Putin does not really see any need for radical change. As Alexander Voloshin, a former Kremlin chief of staff, puts it, “everyone tells us that there will be a catastrophe if we don’t do something. We don’t do it and there is no catastrophe.” So Mr Putin’s next term is likely to be about preservation and stagnation. In this spirit Dmitry Peskov, Mr Putin’s press secretary, recently talked up Leonid Brezhnev as a “huge plus” for the country. Yet his era led to collapse. With its big cash reserves and low debt, Russia may find that economic problems now take time to hit home. But when they do, their effect is likely to be unusually severe—just as at the end of the Soviet Union.