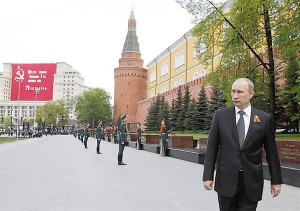 When the news broke yesterday that Vladimir Putin would not be attending the G8 summit in Maryland, speculation bubbled as to why he preferred to send Prime Minister Medvedev instead.  An unwillingness to fraternize with Obama?  A genuinely heavy workload?  Fear of Russia receiving international criticism over the protest crackdown?  Or was it just, as some would have it, a good old-fashioned snub.  Coming a day after the President told the nation that Russia has a ‘moral right’ to an assertive foreign policy at the monumental military tattoo that is Victory Day, it is hard not to suspect that the move has something to do with grandstanding.  Bloomberg sees the reset regressing:

“There will probably be raised eyebrows in Washington,” Lilit Gevorgyan, a Russia analyst at IHS Global Insight in London, said today by phone. “His refusal may be taken as a sign that Russia under Putin will indeed be more inward looking and favor a tougher foreign policy.”