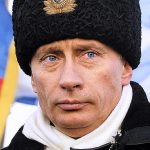 Whether or not Vladimir Putin returns to the Presidency next year, it seems to be widely accepted that the debate surrounding the election ‘race’ is, in reality, a series of well-timed gestures, designed to create the illusion of political pluralism, behind all of which, the former President remains immovable.  Up until this point, the Power Vertical’s Brian Whitmore has suggested that the position Vladimir Putin will occupy is of little consequence, given his iron grip on the scepter of power.  Now, Whitmore says he has begun to revealute this assumption and presents, with the help of Alexander Golts, some intriguing possibilities for a future job title for the current PM:

He, of course, could remain prime minister, keeping the tandem together in its current form. But press reports and pundit buzz suggests he doesn’t really like that job. A National Leader, after all isn’t someone who gets bogged down getting his hands — and image — dirty with the details of day-to-day governance. Moreover, I expect that after the elections a more “liberal” or “technocratic” figure will become premier. Right Cause leader Mikhail Prokhorov is one candidate, should his party do well in the December elections to the State Duma. Finance Minister Aleksei Kudrin is another name that has been floated.

In the past I have suggested that Putin could rule as General Secretary of United Russia, taking a page out of the old Soviet playbook. He could also become Speaker of a United Russia dominated State Duma. But given United Russia’s declining popularity, and the Duma’s weakness to influence policy in a meaningful way, these could prove flimsy foundations on which to base his long-term authority.

The role that I think would best preserve Putin’s control over the system was established in a little-noticed presidential decree that Medvedev signed back in May.

And here, I’ll turn the floor over to defense and security analyst Aleksandr Golts, writing in “Yezhednevny zhurnal” (you can read the English version here):

A quiet revolution has been taking place under the shadow of the Kremlin administration…President Dmitry Medvedev has signed a decree inconspicuously named ‘Security Council Questions’ that suddenly and unexpectedly grants unprecedented powers to the Security Council secretary….

Sounds like a job description for the National Leader.